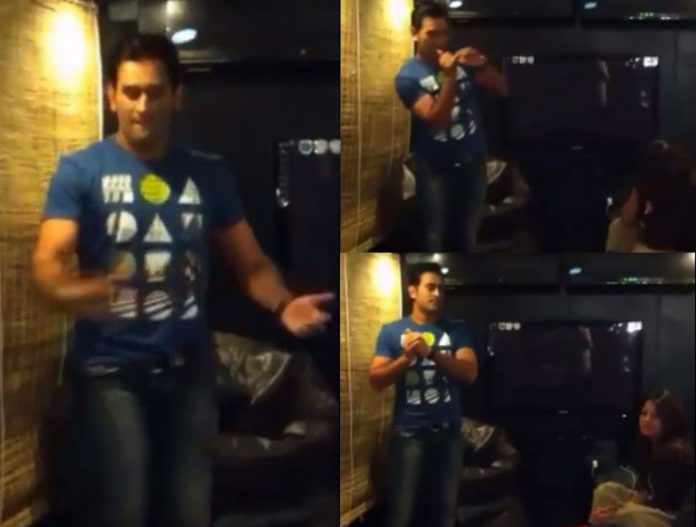 M S Dhoni has been exemplified as “Captain Cool”. He is as cool as a cucumber in the most stressful situations and has steered India to victory on multiple occasions. One wonders how does he handle himself in such a chilled out fashion.

For one, he is a cerebral bloke who can tactfully face any kind of scenario. He thrives when the tide is against him. How does he do it? Maybe it is his off-the-field frolic and jest which keeps him in such high spirits.

So how does he let his hair down? Dunno. But hey, here’s a video where you see him dancing to Jhak maar ke from Desi Boyz.

Sakshi is laughing hard while Dhoni is enjoying himself to the fullest. Nobody knows the exact date when the video was shot. This video appeared in the feed of a profile named cricketshots on the social media website, Instagram.

Dhoni is one of the most successful wicket keeper captains India has produced. As a test captain, he has most wins under his belt . Under his captaincy, India has won championships in every format of the game. He has guided India to victory with his bat by playing many blistering knocks.

Also Read: Anushka & Virat Getting Married This December. Wait, Is This Even True?