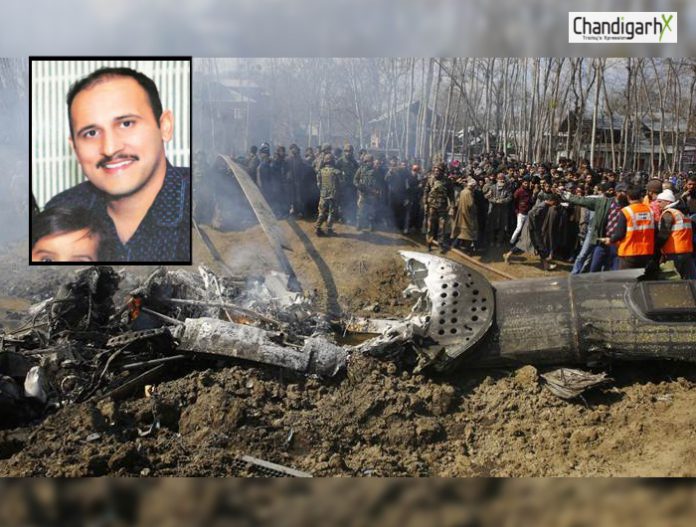 Visuals show the wrecked fuselage of the IAF chopper in flames and a large number of villagers standing around it.

A resident of Sector 44, Chandigarh, Squadron Leader Siddharth Vashisht, dead among other pilots in the ill-fated Mi-17 helicopter crash. Six Air Force officers and a civilian were killed after the Indian Air Force (IAF) chopper crashed in Jammu and Kashmir’s Budgam on Wednesday morning.

A fourth generation officer in the armed forces, he was commissioned in 2010. The 31-year-old pilot, Squadron Leader Siddharth Vashisht, is survived by his wife, Aarti, who is also a Squadron Leader posted at Srinagar, and two-year-old son Angad, besides his parents and three sisters. He was the youngest of four siblings.

His wife was on leave at Gurugram and is rushing back here. An Air Force official said, his mortal remains will be airlifted to Chandigarh today and the last rites will be held here.

Siddharth studied at Shivalik Public School in Sector 41 and thereafter at DAV College before opting to join the forces. He was adventurous and fond of outdoor life. He was keen to be a flier.

His father, Jagdish Kasal, had served in the Army before joining Punjab National Bank as an officer. In fact, his maternal uncle, Vineet Bhardwaj, was a MiG-21 pilot. He died in an air crash 17 years ago. His uncle had been an inspiration for Siddharth.

His family originally belongs to Hamidpur village near Naraingarh. They had shifted to Chandigarh about a year ago.

He had been posted to a helicopter unit in Srinagar in July last. Prior to this he was based at Coimbatore. Recently, during the Kerala floods, he was also part of the IAF rescue operations. Family members said he had received a commendation for his services on January 26, besides other awards for his performance.