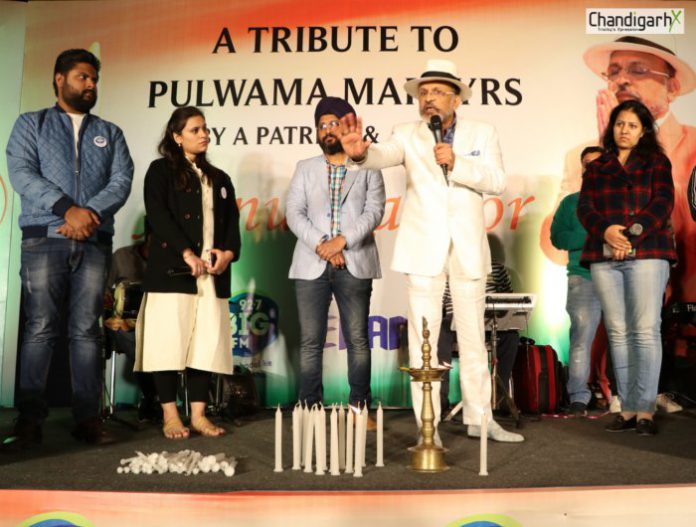 Annu Kapoor, veteran film actor, TV host and radio jockey came to Elante on Saturday to pay homage to the brave hearts. Elante provides people of the Tricity a platform to join for a candlelight vigil.

Providing the people of the Tricity a platform to express solidarity with the CRPF jawans killed in a terror attack in Pulwama district of Kashmir, Elante mall, in association with leading radio channel, engaged veteran film actor, TV host and radio jockey Annu Kapoor to pay a glowing tribute to the martyrs of the Pulwama terror attack in The Courtyard of the mall this evening.

As a mark of respect to the martyrs, Elante also organised a candlelight vigil in The Courtyard, where hundreds of people came forward to light candles in the memory of the brave soldiers.

The air was surcharged with patriotic fervour as local bands and artistes sung patriotic songs like “Ae Mere Watan Ke Logon” and “Sandese Aate Hain” before Annu Kapoor took to the stage and paid homage to the martyrs by lighting a candle in their memory, along with Elante Mall Executive Director Anil Malhotra.

“We stand in solidarity with the bereaved families and salute the valiant sons of Mother India who served the country with matchless valour and made the supreme sacrifice for the nation by attaining martyrdom,” said Annu Kapoor, who paid a befitting tribute to the Pulwama martyrs by lending his voice to patriotic Bollywood songs from yesteryears.

The function concluded with the playing of the national anthem.

Paying his respect to the Pulwama martyrs, Mr Anil Malhotra, Executive Director, Elante Mall, said, “Our hearts go out to the martyrs and their families. We should all remember them in our prayers and do our bit to ensure that the sacrifices of our brave security forces do not go in vain.”