Home Latest News Chandigarh & Around Yet Another Carjacking At Gunpoint Incident in Sector-20, Panchkula. Third In 2017
Facebook
Twitter
WhatsApp
Email 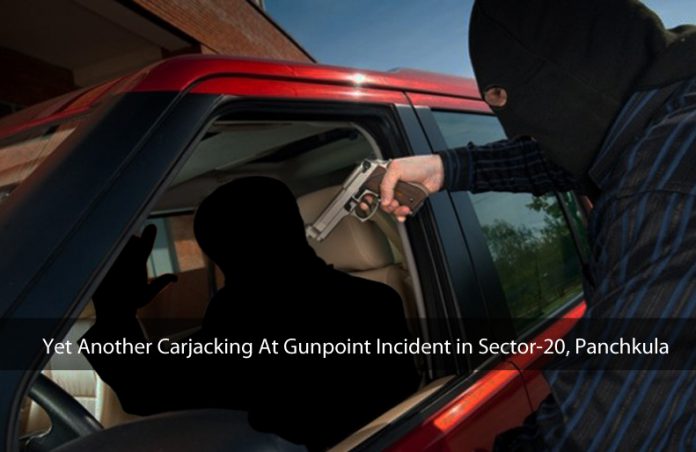 Carjackering incidents are on a rise in tricity. But when all the cases come to be happened in one place again and again it definitely raise an alarm and sense of insecurity among the people.

Sector-20, Panchkula is under the grip of shock. On June 6, 2017 night, a happy family stopped over to buy fruits and veggies and ice-cream for the child, but a carjacker took the car at gunpoint with wife and 5-year-old child sitting inside.

How the incident happened?

An Infosys engineer, Manish Kumar, resident of Peer Muchalla was driving with his wife and son back to his home at around 10.30 pm through Sector-20, Panchkula in his silver Duster SUV. He stopped over to buy fruits, veggies and ice-cream and left the keys in ignition. A man, in no time, entered the SUV and drove off the SUV with gun pointed to the wife. She jumped off, but the child was left in the back seat. Manish and his wife took help from passerby and pursue the SUV in his car, but lost track of it. They approached the Sector-20 police station and police tried to trace the car with Manish’s mobile phone that was left in the car, but to no avail.

The carjacker left the child outside Domino’s on VIP road with a bank passbook. Spotting a crying child, the Domino’s employees, Surender Singh and Harpreet Singh, with their presence of mind used Domino’s database to find his family. They entered the phone number of the father and found Manish’s contact details. The duo themselves took the child to the Sector-20 police station where Manish and his wife were already there.

A hunt is on to find the accused and SUV.

September 2, 2016: Two unidentified youth drove off Mercedes Benz in Sector 15 market; the woman inside jumped out of car after 100 mts. The car was found abandoned in Sector 38.

Feb 14, 2015: Unidentified men drove away SUV from Sector 49-50 with its owner at gunpoint, later dumped him in Zirakpur. The car was found in Panipat.

June 6, 2017: A carjacker drove off SUV at gunpoint. Woman jumped out of car, but child was still in back seat. The child was found by Domino’s employees.

May11, 2017: A woman went missing from Sector 20 market and later was found dead with multiple stab wounds in her car.

While police is putting all its energy in nabbing the culprits, it is important for all of us to be more vigilant.

Just one thing we all need to take care about- KEEP  THE  DOORS LOCKED!