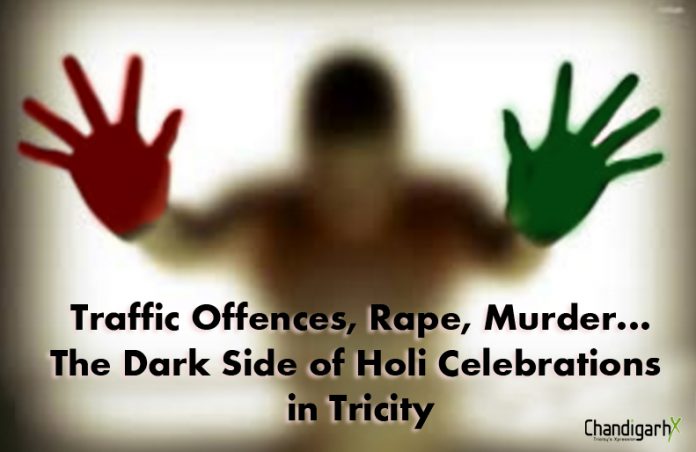 Tricity Holi celebrations are known around the region.

Not just the gedi route, PU campus or the PEC campus, on every road faces beyond recognition were spotted and cars in holi colors with loud punjabi tracks playing… all this was the common view around the tricity.

But, to this colorful celebrations, there were many disheartening incidents that brought shame to the tricity.

As many as 742 people, including 90 of them for drunken driving, were challaned for various traffic offences during Holi celebrations. The Chandigarh police were well-prepared to avert any untoward situation. More nakas were installed and police was on vigil to ensure safe holi in Tricity. A total of 40 motorcyclists were challaned for different offences, including noise pollution, triple riding and driving without helmet, at this naka. The Chandigarh Police personnel attended a total of 516 spots, including 108 of road accidents, 244 of quarrels, 38 of nuisances, 11 of noise pollution and 115 of miscellaneous nature

From skin and eye irritation to accidents and assault cases, the city’s hospitals had at least 250 such patients.

The Chandigarh and Panchkula police got the report of raping of a 14-year old and a five-year-old girls.

It’s always so disgusting to see when the innocent celebrations come to garb such heinous face. Why can’t we have just simple fun? Why has flouting laws become a yardstick for mauj-masti?