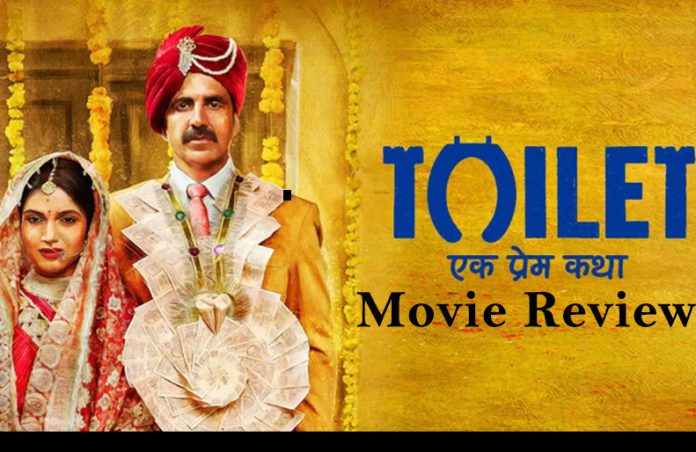 Second?
Question – Which was the first one?
Answer – Yeh Jo Mohabbat Hai. I googled it. 😛

Never heard of it. Must have been a shitty one. I guess our director has an uncanny love for the loo.

Pyaar Se Toilet Ki Katha
Toilet: Ek Prem Katha is about a high school dropout Keshav (Akshay Kumar) who manages his family’s cycle store in a village in UP.  At 36, he is hitched to a buffalo by his orthodox father (Sudhir Pandey), whose mentality is stuck in the stone age. Not long after he falls in love with a strong willed Jaya Joshi (Bhumi Pednekar), their relationship starts off  on lot of misunderstandings but eventually Keshav marries a human bride. After their suhagraat Jaya finds out that her new house does not have a toilet and she must walk kilometers with the lota party of village women who drop their load in a field some distance from their homes. She compels her husband to build toilet in the house (no less than a Taj Mahal) and threatens to divorce him if he does not do her bidding. Keshav in trying to save his marriage finds it is a hugely complex problem that stems from a combination of factors and to bring shauchalay to his village, he must fight the SHAUCH SOCH first. 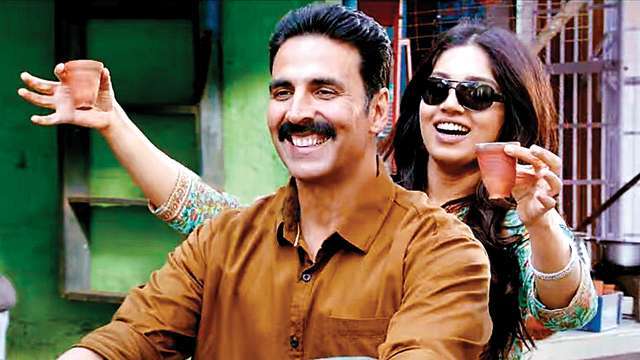 MY REVIEW
Toilet: Ek Prem Katha is inspired by a true incident reported from Madhya Pradesh village a few years ago. We’ve heard Vidya Balan’s government ads on radio and television urging India to end open defecation, exhorting Indians to build toilets in homes and telling us stories of battles being fought across the country in the name of the loo. The story is of a couple who madly loves each other but their marriage is flushed in a toilet. The movie has all the desi feels to it. The story is easily relateable with the desi segments of the society but is an amazement for the urban people as we have been fortunate enough. The film harps constantly on the dignity of women but the irony is that just this week Kumar had spoken up about the stalking and attempted abduction of Varnika Kundu by the son of Haryana’s BJP chief, yet Toilet: Ek Prem Katha adopts the same jestful tone towards stalking.
Akshya Kumar has thrown a sumptuous performance, he looks fresh and has reconstructed himself completely for the role. His facial expressions, comic timing and emotional staging are amusing. Bhumi Pednekar, in her second outing after Dum Laga Ke Haisha fleshes out a zealous performance, she looks appealing a Jaya, who becomes the catalyst for this mini revolution. Divyendu Sharma as the hero’s younger brother also makes his presence felt.
The song Has Mat Pagli Pyaar Ho Jayega comes at few times in the movie and captures the innocence and affection of the couple gracefully. “Gori Tu Latth Maar” is a powerful number and fits perfectly in the movie.
It is a sweet lovely high on content credible film. Though the film at times flatters and scrapes before the present government. The intention is all positive but it could have been better if it were not this toady.

5 BEST ATTRACTIONS OF THE MOVIE

Better plans this weekend or not, just book your tickets and go to watch this movie. It’s worth your every penny and time.