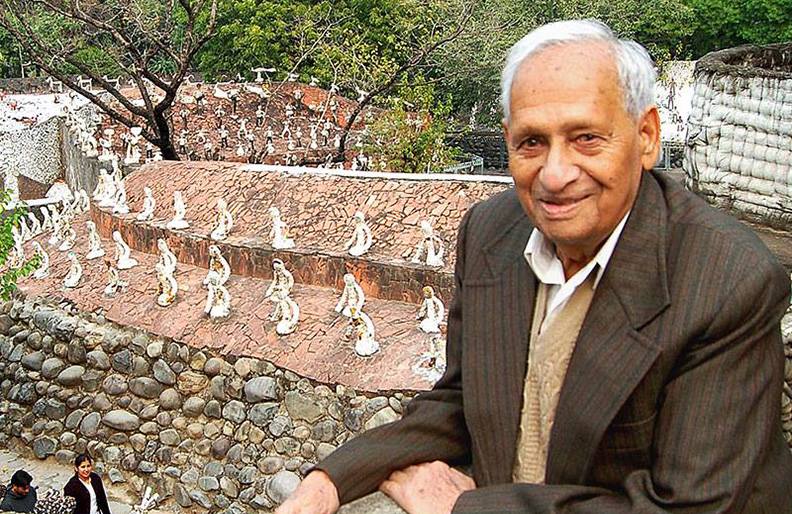 The man who turned his passion for art into an incredible garden which became the epitome of natural conservation- Sh. Nek Chand Saini! The most amazing thing about this amazing artist has been that his vision has been much ahead of its time. It was no earlier than late 1980’s that recycling, green planet, conservation caught global attention, but this man had translated it into his garden way back in early 1950’s when he started using rags and discarded things into creating Rock Garden.

Born in Shakargarh region (now in Pakistan) of district Gurdaspur, his family adopted Chandigarh its abode after partition. At that time, Le Corbusier was working on bringing Chandigarh to life and Nek Chand found the job as a road inspector in PWD here.

In his spare time, he would collect materials from demolition sites around the city, recycle it into what he called as the ‘divine kingdom of Sukrani’. Not many know this fact today, that his work on creating Rock Garden was illegal. The place where Rock Garden is proudly situated today was once a gorge in a forest and it was a designated land conservatory meant to be a forest buffer. But, he was able to hide his work for 18 years!

When the authorities finally discovered the place, it had grown into a 13-acre (5.3 ha) complex of interlinked courtyards, each filled with hundreds of pottery-covered concrete sculptures of dancers, musicians, and animals. Made from recycled materials, he built up the mass with a cement and sand mix before adding a final coating of smoothly burnished pure cement combined with waste materials such as broken glass, bangles, crockery, mosaic and iron-foundry slag.

The administration was pressed on to demolish it as it was an encroachment on forest land, but Chandigarh people stood by him and his stupendous creation. In 1986, finally the park was inaugurated as a public space.

The garden is visited by over five thousand people daily, the second most popular location in India (after the Taj Mahal) with a total of more than twelve million visitors since its inception.

On his birth anniversary today, ChandigarhX most humbly pays tribute to the man who played an immense role in bringing Chandigarh to world map.