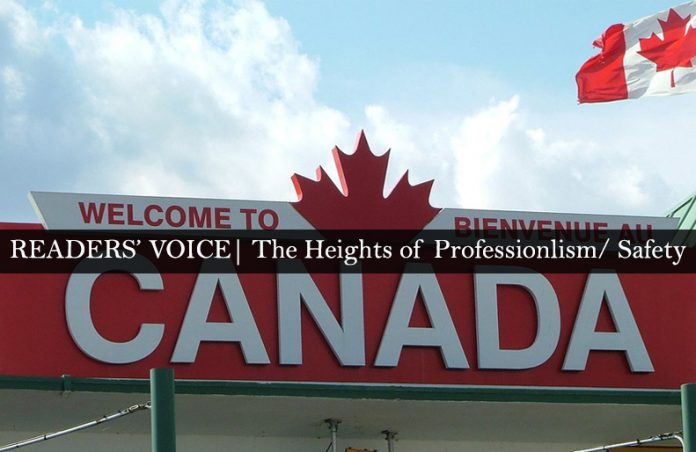 How badly we all wish for discipline to be infused in our society! It’s so frustrating to see people unapologetically breaking rules, wasting precious time still complain how things are real bad in India and turn to the allure of western countries for a better living.

Well, here’s ChandigarhX reader who shares his classic experience of professionalism in Canada.

Wg.Cdr.D.P.S.Bajwa ( Retd.) is retired from Air Force (from Administrative branch) in 1993 and since then he has spending his time helping others realizing their dreams of world-class education in the premier institutions across the world that too charging such a nominal fees. Also, he has been voicing his thoughts on issues that matter and warrant our attention.

Recently when we arrived at Vancouver we walked into a newly built house of our son, who had just occupied it a few weeks ago. The house though livable, is not complete as exterior finishing and painting is yet to be done. Since the by-laws are strictly adhered to, the City (Municipality) inspections of Electrical, Plumbing and building etc. are mandatory before the final ‘occupation permits’ is granted.

To begin with, an old house on this lot (plot) was torn down to make a brand new house. Before the house was demolished, the city people come and find out if any contamination from asbestos, will be there in ‘dry walls’, tape around the ducts or insulation material. While there were traces found in the samples collected, so before the final demolition was done a special clothing (like a space suit with a mask) was worn by a team of workers who tore down the walls, and then changed clothing after a shower especially setup for this purpose. The whole house was cordoned off while this work was done.

Later all that material was sent in a special container for proper disposal of Asbestos which was banned many decades ago.

The house is absolutely complete from inside. There are 10 steps leading to the main floor/ entrance door, these are as wide as 8 feet, where the granite is yet to be put on the concrete. After the granite stone is fixed, only then the side railing on steps will be fixed. However the tradesman engaged for the granite fixing is not free for a week or two. Since the stairs are considered not safe without railing so the postman does not deliver mail at the main door so we had to fix a letter box on a tree in front of the house so that he can deliver our mail without climbing stairs sans railing. We use these stairs every day.

Since they are so wide that there is no issue of safety for just 7/8 feet height. But since safety standards demand that stairs ought to have a railing, the Govt. staff is within their right not to climb stairs if railing is missing.

And here began the pain…

A few days back, we got the intimation that Electrical inspection will be carried out on that day. We waited at the appointed time. We noticed on the screen of our monitor of CCTV cameras, that a man with certain papers in hand and a orange safety vest, was going around our house. So much so that I said ‘Hi’ to him from a balcony when he was in the rear courtyard. We waited for the Inspector to ring the call bell for carrying out inspection inside the house. After a few moments we noticed that he was gone.

Later when contacted, he confirmed that he had to return without carrying out the inspection since there was no railing on the steps. We wondered if he had rung the bell, we could have told him to enter through the garage. When we enter through the garage, there is again a small stair case but it has already got a railing fixed on it. But the catch was that he could not ring the bell installed at the main door, access to which is through the steps only.

Since he never rang the bell we could not tell him to access through the garage!!

Now the Inspections will only be done when the railing is installed.