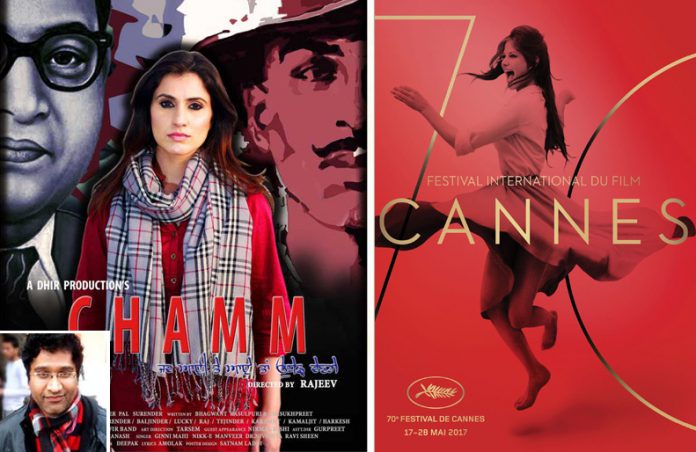 ‘Chamm‘, a Punjabi short film on as serious subject as dalit oppression is going to be screened at the ongoing Cannes Film Festival tomorrow, i.e. May 25, 2017 in the ‘2017 Short Film Corner’.

The 35-minute movie, CHAMM, highlights the ordeal of dalits in the state of Punjab – a state where 28.9% of the population falls in the scheduled caste (SC) category. Incredibly enough, the movie was selected within a month of its release.

Earlier on May 18, the movie was screened at the International Film Festival of South Asia at Toronto, Canada, where also won the hearts of everyone.

Do You Know Panjab University’s alumnus is the proud director of the movie?

Rajeev Kumar, the shining glory of PU’s Department of Theatre has already won many accolades for his visionary and sensitive portrayal of stories onscreen. His directorial debut, NABAR, won him a national award earlier in 2013. The movie, based on the struggle of a small farmer who fights illegal immigration agencies after his son’s death, captured a major issue that that has plagued Punjab for decades.

Now, Chamm has made him an international star.

“I picked up the story of the movie from a piece of dalit literature. It is about a dalit man trying to take the skin of a dead animal to his village. But, because of the community the man hails from, he does not get any help from people even though he is willing to pay them,” says Rajeev.

For Rajeev, Chamm was the next step to highlight the issues of the masses. “Nabar was on the issue of a Jat Sikh. I also wanted to explore the subject of marginalized people in our society and Chamm is the result of me going through dalit literature,” he says.