The ongoing agitation of Panjab University, Chandigarh, students against tuition fee hike turned ugly yesterday. Police and students clashed in which students were lathicharged, water canon and tear gas were used to contain them while students resorted to stone pelting on the police. In return, many were injured. The police arrested 66 students on charges of sedition.

PU students had declared ‘bandh’ of PU on April 11, 2017. No classes were held nor any shops in the campus were opened. Since morning, the police had positioned themselves in the campus to avoid any untoward situation. The students gathered in front of VC office, raising slogans and demanding roll-back on fee hike. 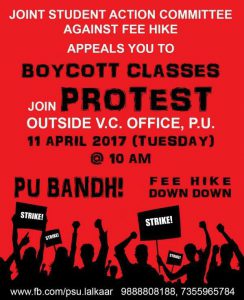 The situation soon became ugly with students and police scuffle. The violence started when the students tried to force entry to Vice-Chancellor Arun Kumar Grover’s office and were stopped by the police, who were already present in the campus. The students became aggressive and police used water canon, tear gas and lathicharge to disperse the mob. The students took shelter in the campus gurudwara. The angry students pelted stones on the police who in turn took refuge in VC office building. The students threw stones on passerby’s cars in front of Gate no. 1 of PU too.

The police has arrested 66 students on sedition charges and damage to public property. Many student leaders have also surrendered. Section 144 has been imposed. The police has barred any entry without ID card.

Aftermath of the protest:

About the Fee Hike:

The tuition fee hike for the 2017-18 session was necessitated to fight the financial crunch the PU is facing. The fee hike has seen an average 12.5% increase with some seeing shooting up to 1,000%. The Union Ministry for Human Resource Development (MHRD) and the University Grants Commission (UGC) have been pressing PU to increase income from internal resources if grants are needed. The PU has justified the hike as the university is anticipating a deficit of Rs 244 crore for the financial year 2017-18. But student organisations including the Students for Society, National Students Union of India and the Punjab University Students Union have been demanding a rollback. The subsequent protests led to the disruption of classes since last week.

Panjab University Closed Today Due to Protest Against Fee Hike