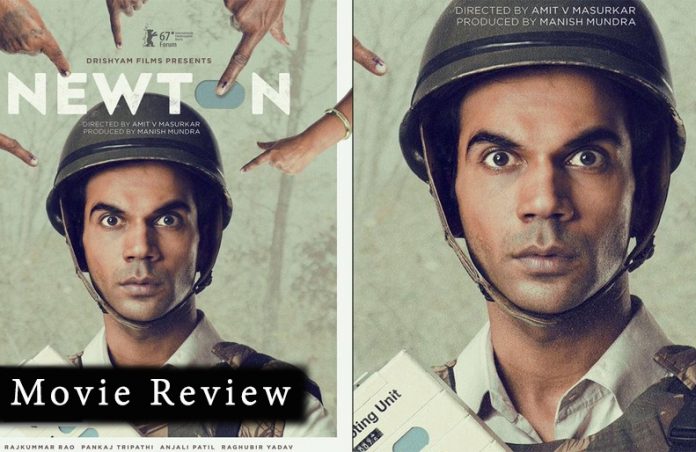 Rajkumar Rao deserves all the awards in the world so now he is running to Oscars.

Storyline
Newton played by Rajkumar Rao is an earnest man, to the extent that he is annoying. Even people who liked him start to lose their patience for the same. He might have changed his name from Nutan to Newton but he never forgets to play by the rules. He is to conduct a free and fair election in a remote, forested Chattisgarh polling station to which he has been assigned as presiding officer. His companions on that journey into a Naxalite-ridden conflict zone where everyone is too afraid or too skeptical to vote are senior policeman Atma Singh (Pankaj Tripathi), a local booth level officer Malko Netam (Anjali Patil), an official of indifferent health called Loknath (Raghubir Yadav) and a bunch of cops who are on duty to guard them. 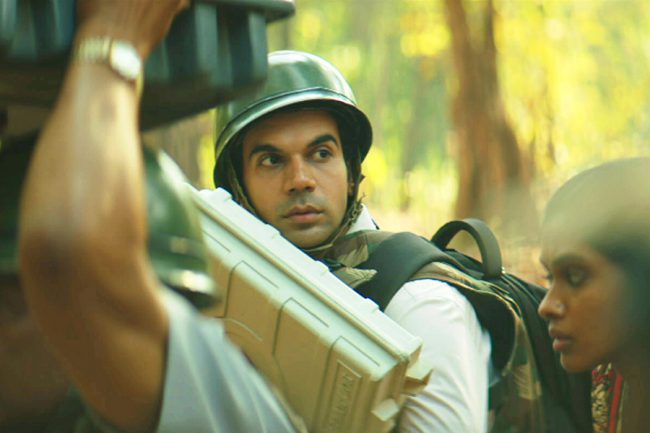 The first realization comes to the mind is that we are so privileged to live in the place where we live because many people are not as fortunate. The plight of the people of that part of the country moves you to the core. The locations are real and most of the movie has been shot in the jungle and you get to know a lot about significance of that place from the mythological point. The screenplay of the movie plays very skillfully with the characters as Newton also meets all the characters except his parents for the first time which helps to connect well with the main character. Some scenes are exceptionally well written and shot but usually won’t leave a mark if you don’t pay attention to the detail. My favorite is the one where Newton is eating the apple. The tone of the movie has been kept light and is full of grey comedy. The movie doesn’t necessarily show the sad lives of the aadivasis or gives deep insights about the polling but tells what it wants to tell.
Rajkumar Rao as always has done such a fine job. I would like to believe he is a human chameleon because otherwise it is not easy to get into different roles so perfectly and leaving no trace of himself. Pankaj Tripathi is an extremely compelling performer. He is so honest to his role that at times it was unclear if he even had lines or he was just going with flow. His moment of eyes and the yawns are very real. Rao and Tripathi provide terrific performances, especially when pouncing on one another – even literally. Anjali Patil as a smartly dignified Adivasi woman is stunning. Sanjay Mishra has a special performance as a trainer and gives an important lesson to the character.
The music is gentle and you don’t really notice when it is not there. You do not want to deprive yourself of the opportunity to listen to ‘KAR’ penned by Irshad Kamil.