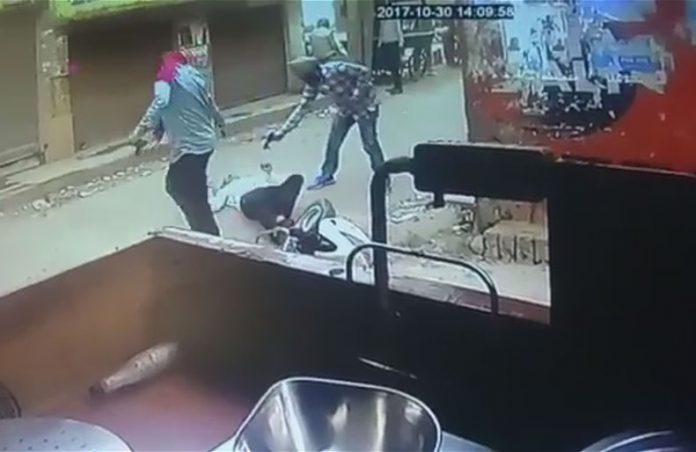 In a blood-curdling incident in Amritsar, a Hindu outfit leader was shot dead in full public view by four unidentified men. The incident happened in the Bharat Nagar locality on the Amritsar-Batala road at around 2 pm.

As told by the police, the victim, Vipan Sharma, a Hindu Sangarsh Sena district chief, was standing with a friend outside a shop in the bustling Bharat Nagar locality. Two men, one with face uncovered, came and pumped around a dozen bullets into him. As seen in the CCTV footage, Sharma is talking to people on the street. He had come to meet his friend, Ramesh Kumar Monu, who is state president of the outfit. Monu managed to escape as the assailants had only Sharma on their target.

After firing at Vipin, both the suspects ran from the spot. Two more persons were waiting for them nearby on two motorcycles and they sped away which have been captured in CCTV camera near the murder spot.

“He was brought to the emergency wing of the hospital where a team of doctors declared him brought dead. There were around 15 injury marks on the deceased’s body, including 8 bullet marks,” the Escort Hospital’s director, Dr H P Singh, said.
Sharma is said to have applied for police protection
The deceased’s relatives and friends claimed that he had recently applied for police protection, since he was active in raising his voice against the ‘Ghalughara week’ (Operation Blue Star anniversary).
Amritsar Police Commissioner S S Srivastava said, “It is not in my knowledge that he (Vipin) had demanded any security cover in the recent past. But, we are checking if he had received any threats recently.”
The footage from these cameras had been procured and the police was trying to identify the accused by making their sketches, he said.
Murders of prominent local leaders in past few years

Besides these murders, matriarch of the Namdhari sect, two followers of Dera Sacha Sauda and a Christian pastor have also been shot dead in the past two years