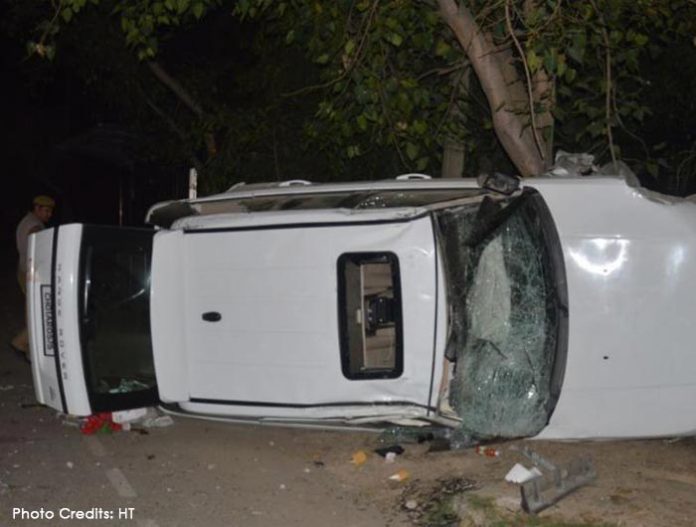 Speed thrills, but kills. True to its very core. However in a tragic accident that happened in Sector 49, Chandigarh, on the intervening night of Thursday and Friday, the reckless late night race between two SUVs killed an innocent biker.

The victim is identified as Aman Raswanta, 28, who hailed from Kotkapura in Faridkot district, Punjab.

As per the complainant’s account, a group friends driving Range Rover and Toyota Fortuner were racing in the wee hours of Thursday-Friday night. They were heading to Mohali from Chandigarh. All of a sudden, Range Rover driver, Chamkaur Singh Virk (29), lost control over his SUV. He hit a Maruti Suzuki Alto, which then rammed an electricity pole on the dividing road of Sectors 48 and 49.

The Range Rover then jumped the median and hit a motorcycle. The motorcyclist, Aman Raswanta, was dragged under the SUV for approximately 500 metres before the Range Rover finally stopped when it hit a tree and landed on its side.

Range Rover driver, Chamkaur, fled the scene with the help of his friends in the Fortuner, who smashed his vehicle’s sunroof to free him from the mangled SUV.

Aman was rushed to Government Medical College and Hospital, Sector 32, where doctors referred him to Post-Graduate Institute of Medical Education and Research. But he was declared brought dead.

Range Rover driver arrested and let off on bail

The complainant is Alto’s driver, Shalinder Pratap, resident of Phase 10, Mohali. On his complaint the police arrested Chamkaur Singh Virk and registered a case under Sections 279 (rash and negligent driving) and 337 (causing hurt by act endangering life or personal safety of others) at the Sector-49 police station. It was only later in the day on Friday that cops added Section 304 (A) (causing death by negligence) to the FIR.

He was let off on bail hours after his arrest, as Section 304 (A) (causing death by negligence) of the Indian Penal Code (IPC) is a bailable offence.

“Inspection of Chamkaur’s vehicle revealed a broken sunroof, though the vehicle landed on its side, consolidating the injured eyewitness’s account of Chamkaur’s friends having helped him flee,” said inspector Jaswinder Kaur, station house officer (SHO) of Sector-49 police station.

She added that doctors had ruled out the possibility of the accused being under the influence of alcohol. “But Chamkaur’s blood and urine samples have been sent for tests,” she said.

Mangled bike and helmet and tyres marks on roads

The road where the accident took place has marks that indicate the SUV dragged for 500 metres before its run was stopped by a tree. The broken handle of the motorcycle, broken pieces of Aman’s helmet and smashed glasses reflect the events that transpired.

The impact of collision of Range Rover with the Alto and bike before it overturned that its tyres came off the rims and blood was smeared on the rear and even the safety bags.