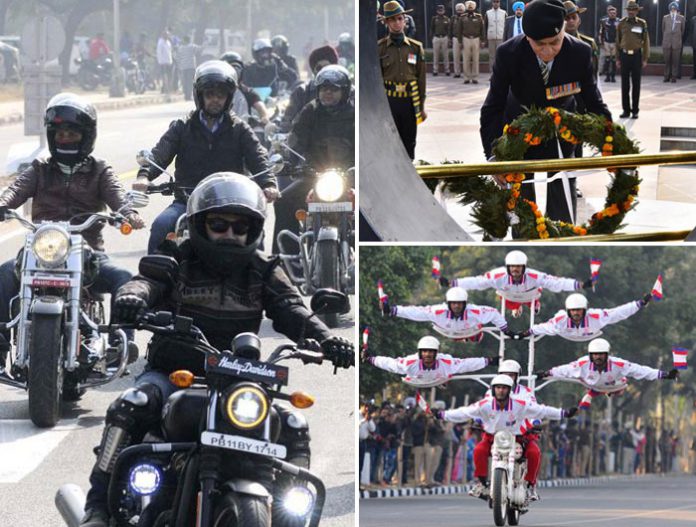 India’s first Military Literature Festival is held now. This event has been organised  for paying a tribute to the armed forces. The contributions of our military and paramilitary forces have served to the nation loyally. Their unparalleled sacrifices have been embedded in history in golden letters.

The Military Literature Festival (MLF) is being held near Sukhna Lake in Chandigarh from December 7-9.

Great military leaders, thinkers, authors, writers, poets, artists, journalists and war correspondents from all over the world will be participating in the prestigious event.

Capt Amarinder Singh, the Chief Minister of Punjab presided over the first session of the Military Literature Festival. The event was inaugurated by Navjot Singh Sidhu, Minister of the state, Local Bodies and Tourism & Culture.

The festival will have many attractions such as book exhibitions, handicraft stalls and an armament display. The book exhibition will certainly be a crowd puller as lots of books have been written on defence and strategic affairs and wars in the past many decades.

Rocking Prelude to the Festival

The Military Literature Festival started with a bang. Thanks to the ‘Brave Hearts’ ride, the Tricity witnessed an exciting sight. Starting from the Chandigarh War Memorial, a cavalcade of 317 heavy bikes grunted through a 41-km stretch for promoting and raising awareness about the event.

Lt. Gen. T.S. Shergill (retd), Punjab Chief Minister’s Senior Advisor, underlined the importance of promoting all aspects of Military Literature,”Military literature had ancient roots, with the longest poem, the Mahabharata, being all about warfare”. He also elaborated the importance of military technology and literature.

Also Read: Pinjore and Kalka Could be Out of Panckula MC; Decision To Be Taken Today