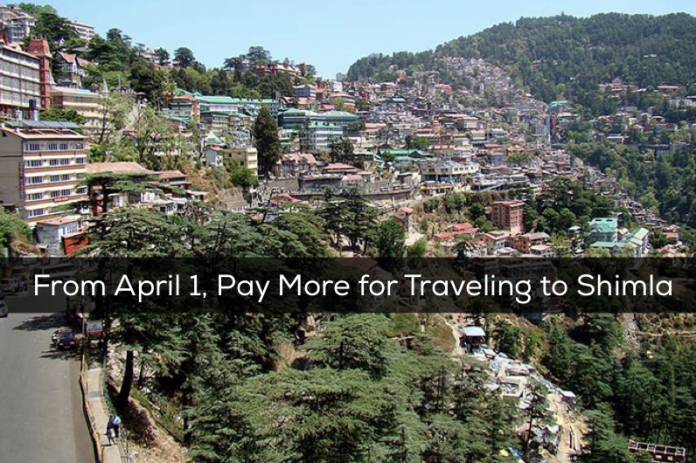 The Shimla Municipal Corporation has levied a “Green Tax” on vehicles entering the city from outside the state from April 1 onwards. Likewise, travellers from Parwanoo to Shimla will have to pay several tolls. These consist of the existing entry tax and a toll that will be charged at Sanwara, Dharampur.

The entry tax is being levied for the past two decades. As per a senior official of the Excise and Taxation Department, the automobiles which are registered in Himachal are exempt from paying the entry tax but all highway users will have to pay the toll. Across the state, the administration collects tax to the value of ₹95 crores approximately at inter-state barriers.

According to Himanshu Pawar, Deputy Commissioner, State Excise and Taxation, Solan, the department is working to renew tax licenses by hiking the dues by around ten percent over the previous year.

He added that the entry tax rate is ₹40 to ₹70 depending on the size of the vehicle. The Parwanoo division is likely to add nearly ₹13.08 crore to the state exchequer as per the reserve price fixed for the subsequent financial year.

The toll would be submitted at a plaza at Sanwara from April 1. It will be collected by a private firm involved in the broadening of the Parwanoo-Solan road.

The move will cost a few bucks to tourists. Eighty percent of the expansion work has been done. Thus, they are eligible to charge toll as per the norms. The rate is yet to be fixed.

Residents are questioning whether the government can charge tax on a road maintained by the Central Government. Also, visitors were hopeful that after the highway toll was paid, the corporation would eliminate its own entry tax. However given the monetary crunch, it is likely that they would not do away with such a tariff.

In view of decreasing air pollution in Shimla, the National Green Tribunal (NGT) has directed the local urban body to charge “Green Tax” from tourists. The government will charge ₹500 from those driving polluting automobiles. This rule was applicable a few years ago. Later, it was discontinued.