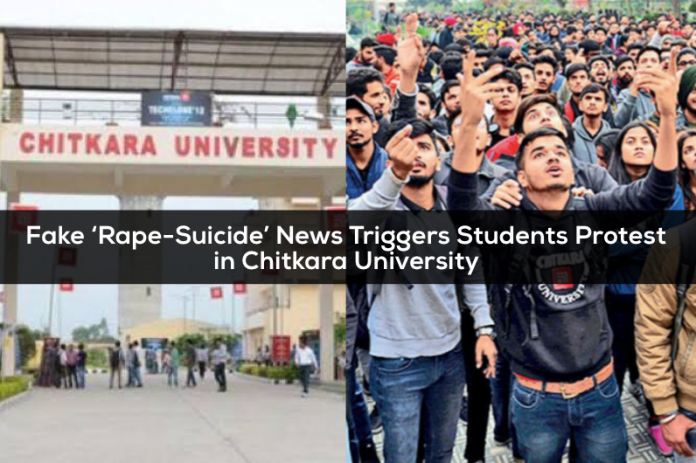 Chitkara University became an arena of angry students protests on Wednesday, which turned to be ‘unnecessary’ based on nothing but a rumour.

On Tuesday night at around 9.30 pm, the police received a rather anxious call reporting a university student had committed suicide after being gang-raped. Police came in the campus around midnight along with an ambulance to investigate.

As it turned out, the complaint was nothing more than a misunderstanding.

The complainants had informed the police that they had found blood-stained clothes in room number 120. They didn’t know the girl and police investigated and found it just a misunderstanding.

In the morning, rumour spread that a girl had been raped and committed suicide and university management is covering up the matter. The protests erupted with students ‘demanding justice’. The management tried hard to clear the air but to no avail. Angry students demanded the girl to be brought before them, but she couldn’t be traced as she was away to take her quarterly exam leaving her mobile phone and books behind which all the more fuelled the rumours that the girl was missing. However, after she was back from her exam, she addressed the students and finally the whole misunderstanding was cleared.

As Per The University

According to Dr. Neelam Verma, Deputy Dean, Student Affairs, the girl had recently got married. The stains were of the blood she had wiped off her face after plucking out pimples from her face.

Parents of the students who were part of the protest were called to the campus. The parents said they regretted the mischievous act of their wards. No action was taken against anyone.