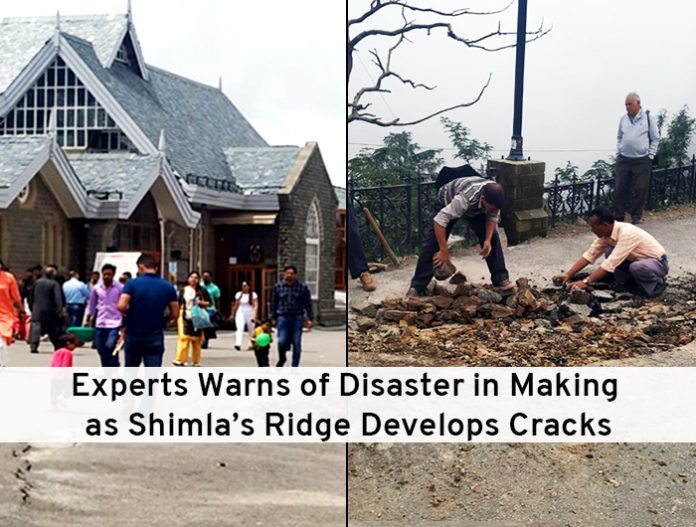 Heavy rainfall in past few days exposed cracks on Shimla’s iconic, the Ridge. It appears to be slowly sinking due to the pressure of unplanned construction, infrastructure developments and illegal felling of trees.

The cracks are evident on the northern slopes of the Ridge. Gaiety Theatre is another centuries-old British era attraction. Signs of sliding are also visible a few meters from here and Christ Church.

The site of the Ridge has been chosen for the installation of a statue of former PM Atal Bihari Vajpayee. It is expected to come up next to Ms. Indira Gandhi’s and Himachal’s first CM Dr Y S Parmar’s. Already, there exist statues of Mahatma Gandhi, Lala Lajpat Rai and former General Officer Commanding-in-Chief of the Western Command, Lieutenant General Daulat Singh.

What Are The Experts Saying

Specialists have issued a warning in this regard.

The following experts have come into the picture:

The Ridge could witness a major disaster if immediate steps are not taken, warns the area’s chief architect. The area was carved out by slicing down a hilltop. Debris was dumped on its northern sides. Over the years, it has settled. However, this portion, particularly towards Rivoli Bus Stand and Tibetan Market, keep sliding due to seeping of the water. Though sinking is an obvious thing during rain and snowfall, the slopes have become overloaded now.

As per the experts here, about 25 percent of old Shimla is in the sinking zone. More area could slide further if improvements are not made in the drainage and sewerage systems uphill.

He advocates a permanent solution to this problem. As of now, the measures adopted such as filling in the surface cracks with cement and concrete or putting sandbags are only temporary solutions.

What Are The Officials Saying

The Shimla Municipal Corporation has admitted to the following loss already occurred:

According to Kusum Sadret, Shimla’s Mayor, this serious problem needs an engineering and geological solution to save the Ridge from sinking.

As per Balbir Thakur, retired IPS officer, to save this area, all large scale official functions including rallies and religious processions should be banned.

More About The Ridge

Following carve out the importance of the Ridge as an infrastructural development since the history of Shimla:

There is a 9.7 million litre water storage tank beneath the Ridge. It was built in 1880. The tank is for meeting Shimla’s drinking water needs.

It hosts official functions such as the parades on Republic Day and Independence Day. Also held at the Ridge were swearing-in-ceremonies of CM Prem Kumar Dhumal, Virbhadra Singh, and Jai Ram Thakur. Tourists from around the world who visit Shimla do come to see the Ridge too.

Almost a half-century-old event, it was only a few years ago that its location was shifted away from the water storage reservoir. This was a precaution. There is also a ban on any vehicle including ambulances on this belt.