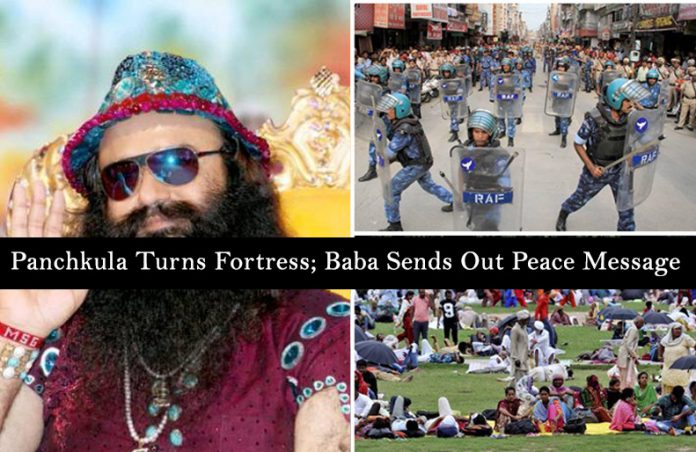 In the wake of today’s CBI court verdict on rape case against Dera Sacha Sauda Chief, Baba Gurmeet Ram Rahim Singh, Punjab, Haryana and Chandigarh have been on high alert for past so many days.

The CBI court is expected to pronounce its verdict at 2.45 pm

What is the message of Baba Gurmeet Ram Rahim: GO HOME!

How lakhs of people thronged in Panchkula despite section 144 of the CrPC imposed?

Yesterday, on a Public Interest Litigation (PIL) filed by a Panchkula resident raising law and order concerns as over 1.5 lakh people had reportedly entered the district, despite prohibitory orders under section 144 of the CrPC, the Punjab and Haryana High court pulled up Haryana government for not imposing Section 144 CrPC correctly to prevent the huge gathering of followers in Panchkula. The provisions were against carrying weapons not on prohibition on assembly of five or more people.

The state advocate-general told the court there was a “clerical mistake” in the Section 144 order passed by officials.

Later, it was amended and a provision invoked banning assembly of five or more persons was added.

Hayana Helpline and state riot control centre numbers:
The Haryana government has also set up a state riot control centre at the police headquarters in Panchkula. “Anybody who has any information about law and order or riots or requires police assistance can contact the State Riot Control Centre on the phone numbers 0172-2587905, Fax No. 0172-2587906. Apart from this, they can also contact the phone numbers 0172-2587901 up to 2587904 or 100. Information provided by them would be kept secret,” a state government’s spokesperson said.
Security measures since Punjab & Haryana High court order on Section 144:
♦ Apprehending that it would need to take large number of people into custody on Friday, the Haryana government has declared the Chaudhary Tau Devi Lal Stadium Complex in Panchkula, and Dalbir Singh Indoor Stadium in Sirsa as special jails with immediate effect.
♦ Last night, mobile internet services including 2G, 3G, 4G, CDMA and GPRS, all SMS services and all dongle services provided on mobile networks, for the next three days, except voice calls, were suspended in Punjab, Haryana and Chandigarh. Net services would be restricted in Chandigarh from Friday.
♦ Late on Thursday night, commotion was witnessed in Panchkula when the district administration made public announcements, urging the dera followers to disperse from the town in view of the prohibitory order under Section 144 of the CrPC, which prohibits the assembly of five or more persons. Meanwhile, the Army was put on standby as the agitated dera followers started moving away from Sectors 3, 4 and 5, close to the CBI court in Sector 1 past midnight. Official sources did not rule out clamping of curfew and sealing Panchkula on Friday, besides contemplating ban on the entry of outsiders to Panchkula. Hectic activity was also witnessed at Tau Devi Lal Stadium in Sector 3, which was designated a special jail.
♦ Mobile internet services are down in Haryana. However, the police in Gurgaon tweeted that the satellite city, where top international firms have large offices, will not be affected.
♦ Over 700 government buses and 25 trains were cancelled as a preemptive measure. Himachal Pradesh Road Transport Corporation suspends 150 bus routes to neighbouring states.
♦ Yesterday, Prabhjot Singh, Deputy Commissioner, Sirsa said, “Curfew has been imposed in Sirsa from 10 pm tonight. It shall remain in force till further orders. We advise people to stay indoors. Also, the Army has been called in and shall be deployed across Sirsa tonight.”
♦ The government has deployed more than 20 companies of paramilitary forces along 250-km Sirsa to Panchkula stretch. As reported in The Indian Express, top state officials were exploring the possibility of airlifting Ram Rahim from Sirsa to Panchkula to avoid chaos. The district administrations of Sirsa, Hisar, Fatehabad, Ambala and Panchkula have been placed on high alert. “The route and mode by which the Dera chief will be produced in the court cannot be divulged because of security issues,” said Haryana police chief Sandhu.
♦ The district administration of Sirsa had asked people with valid armed licences to deposit their firearms at the nearest police station. A senior state government officer said only 60 per cent of such weapons were deposited.
♦ Haryana had requested for Army to be deployed. 25 columns of the Army and nearly 18,000 paramilitary personnel reached Panchkula. “These columns are coming from the western command in Chandimandir,”said Haryana DGP B S Sandhu.
♦ To protect the court complex in Sector 1 Panchkula, the security agencies have put in place a four-tier security system. It has been turned into a fortress.
Roads Closed
♦ The movement of traffic has been stopped on five roads around the District Courts. The roads surrounding the premises of the court and the road separating Sectors 1 and 2 will remain closed for two days. Besides, the road separating Sector 1 and 6, roads from old Panchkula to the Tank Chowk traffic lights and the routes of Majri Chowk beneath the flyover have been closed. The entry to Panchkula from Hallo Majra has been sealed. All borders of Panchkula have been sealed.
Shops closed in Panchkula
The Panchkula Beopar Mandal and the Industries Association have decided to close their shops and industries on Friday in Panchkula.
No holiday in UT Chandigarh offices today
The offices of the Chandigarh Administration will remain open on August 25.
UT govt schools closed on Saturday
Government schools in the UT will remain closed on Saturday. Six schools have been earmarked for the stay of the security forces.
Source: HT, Times of India, The Indian Express, The Tribune, Financial Express