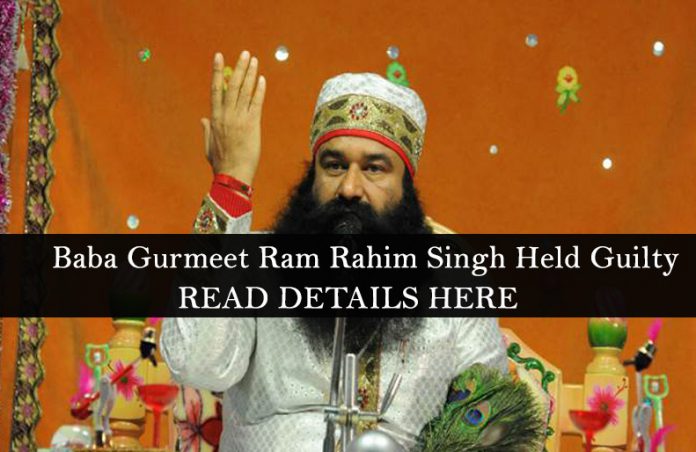 The CBI Court in Panchkula has held Baba Gurmeet Ram Rahim Singh guilty of charges of raping two ‘sadhvis’ (female followers). The quantum of punishment will be announced on Monday i.e. August 28, 2017.

Ram Rahim Singh has been taken into custody by Haryana Police.

As the proceedings of the day follows:

4.55 pm: Curfew imposed in Patiala and Fazilka districts of Punjab.

4:40 pm: Punjab CM Amarinder Singh has just tweeted saying that he has spoken to Home Minister Rajnath Singh. “Would not allow anyone to disturb peace in Punjab,” he said.

4:25 pm: Delhi and Gurgaon have been put on high alert now. Uttar Pradesh has reportedly sealed the border with Haryana.

4:18 pm: Curfew has now been clamped in Panchkula as supporters have become restive in the wake of the court decision.

4:05 pm: Gunshots are now being fired in Panchkula. The scene there has become very chaotic. Violence, in case of a conviction, was expected.

3:55 pm: Curfew has been imposed in Malout and Mansa in Punjab.

3:00 pm: Dera Sacha Sauda chief has been convicted in rape case by CBI court in Panchkula. The bench said that the quantum of sentence in the case will be announced on Monday, 28 August, 2017.

2:55 pm: Reports say Judge Jagdeep Singh is currently reading out the verdict in the court.

2:50 pm: Power cut in some areas of  Panchkula, Mobile phones switched off inside the court.

2:30 pm: The hearing in the case has begun at CBI court in Panchkula, HT reported. The verdict will be declared shortly.

2:28 pm:  “We have made adequate arrangements for the post-verdict situation. Whatever is court’s verdict, we shall implement the court procedure. We are ready to deal with any kind of situation. I appeal to the people to maintain peace and harmony”, said Haryana Chief Minister, Manohar Lal Khattar while issuing a public appeal

2:18 pm: Gurmeet Ram Rahim Singh arrived at CBI court in Panchkula, where the verdict will be announced any time now. We will keep you updated with the verdict as soon as it is announced.

Meanwhile, Punjab police has initiated a one-km curfew outside the premises of Patiala Palace, as the situation continues to get tense ahead of the verdict.

1.35 pm: Curfew has been imposed in a one kilometre radius around Punjab Chief Minister Amarinder Singh’s residence, reports HT.

12.49 pm: The AG has told the Punjab and Haryana High Court that media reports claiming the dera chief is travelling to Panchkula in a convoy of 800 vehicles is incorrect. “The convoy comprises five vehicles of dera chief and five-six of state police”, AG said. He was responding to a full bench, comprising Acting Chief Justice Justice SS Saron, Justice Avneesh Jhingan and Justice Surya Kant, which was hearing a PIL this morning.

12.42 pm: The Punjab and Haryana High Court has said “forces should not hesitate to use weapons, if required”, while hearing a PIL on the situation in Panchkula. The bench of justices also directed the Haryana government to monitor the law and order situation and take immediate action against any political party or leader if there’s interference.

12.38 pm: Army columns are moving Panchkula, as more followers gather in the town ahead of the CBI court’s verdict against Gurmeet Ram Rahim Singh. At the same time, personnel are surveying the city from helicopters, to maintain law and order.

12.32 pm: What is Dera Sacha Sauda? The spiritual sect was established by Mastaa Balochistani on 29 April 1948. The sect’s headquarters is located in Sirsa district of Haryana, but there are over 46 ashrams across the country. Gurmeet Ram Rahim Singh, 50, is the head of spiritual sect. The Dera’s official website claims it has 60 million “faithful followers” worldwide. It has a massive following across Punjab, Haryana and other states, most of whom are Dalits.

12.10 pm: Former Haryana CM Bhupinder Singh Hooda has appealed to the people to maintain peace. “Want to appeal to people of Haryana to maintain peace,” he was quoted as saying by ANI. Meanwhile, the Dera chief, after stopping to eat breakfast at Kaithal, is now on the road again. He is likely to stop in Kurukshetra next, reports Hindustan Times.

11.54 am: 89 trains in the Ambala division of the Northern Railway has been cancelled in light of security arrangements made ahead of the CBI court’s verdict on the rape case against Ram Rahim. Dinesh Kumar, Divisional Railway Manager (DRM), Ambala division, told Chandigarh Newsline that no train would operate from 5 am to 5 pm between Chandigarh and Ambala on Friday.

11.36 am: Security around the CBI court in Panchkula has been beefed up, with three layers of security comprising 150 personnel of the Haryana Police and paramilitary forces. Security is also beefed up at the CBI zonal headquarters in Sector 30. CBI Judge Jagdeep Singh, who will pronounce the verdict, has been assigned additional security as well.