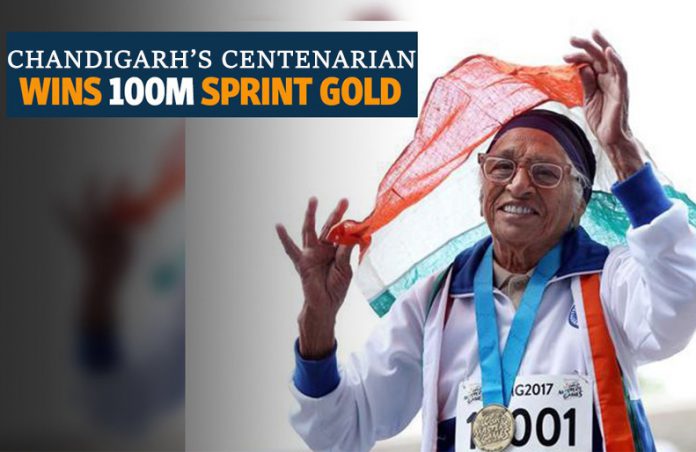 ‘Age no bar ‘- we have often heard this people saying on number of occasions, but nobody in his/her wildest dreams would have thought of taking up athletics professionally that too AT AN AGE OF 93!

We have been proud of world record holder S. Fauja Singh, age 106 who has been a living example of resolute and never say die attitude. Now, there’s another Punjabi, THAT TOO FROM CHANDIGARH who is inspiring us and making us proud.

Aged 101, she has 17 gold medals to her kitty that too in 8 years of running professionally.

She is dubbed the “miracle from Chandigarh” by the New Zealand media.

Recently Ms. Man Kaur won gold in 100 metres sprint at the World Masters Games in Auckland. She took one minute 14 seconds to complete the sprint. She is dubbed the “miracle from Chandigarh” by the New Zealand media.

“I’m going to run again, I’m not going to give up. I will participate, there’s no full stop.”

Ms. Man Kaur took up athletics only eight years ago, at the tender age of 93. She had no prior sporting experience in athletics. It was on her son’s, Gurdev Singh, suggestion she joined him in competing on the International Masters Games circuit.

After a green signal in a medical check-up, there has been no looking back for her. The mother and son have participated in dozens of Masters athletics meets around the globe.

The centenarian already has a swag of gold medals that would rival Michael Phelps’ haul and also plans to compete in the 200m sprint, two-kilogramme shot put and 400 gram javelin in Auckland, taking her medal tally to 20.

Also Read: Excavations Hint Mohali To Be The Cradle Of Man’s Evolution Outside Africa