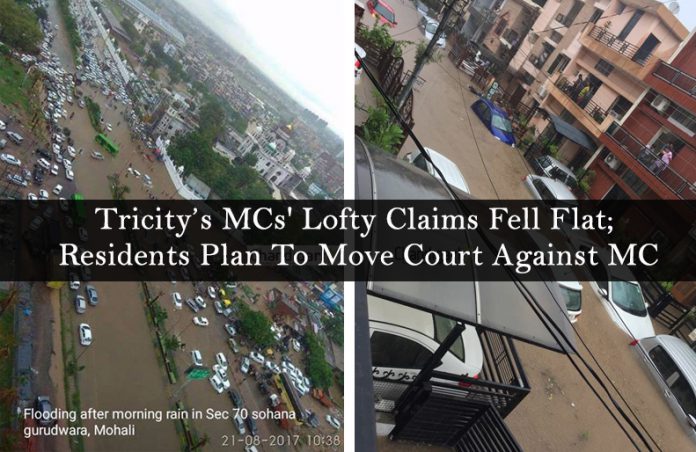 Monday morning blues of many of the tricity residents faded away with the beautiful sight of rainfall, however soon the pleasure turned into a horror. The torrential rainfall for good three hours washed away the beauty on its face and uncovered major flaws in Chandigarh, Mohali and Panchkula’s municipal operations.

Major roads, including highways, residential areas were flooded with waist-deep water at least. Rain water creeped into houses in many localities of Mohali and Panchkula. Being the morning’s peak traffic hour, commuters were stranded on roads for hours, rainwater seeping into the cars and buses. The worst affected was Mohali where roads were water-logged for hours even after the rain. The movement on highways connecting to Ludhiana, Delhi and Patiala were severly affected with broken down vehicles stranded on roads.

How bad were the things in Tricity?

Sector 32, 35, 43, 44, 45, 22, Palsora, Burail, iron market in Sector 29 were worst affected with heavy water-logging and traffic. All roads towards IT park were blocked with water and heavy traffic.

PGI had to shut 2 emergency UTs due to leaking roofs.

Work was also suspended at Chandigarh District courts in Sector 43 due to heavy rainfall and no electricity. The basement of the building got flooded and water enterd in the record room in the basement.

Water entered in more than 50 houses in Sector 16. Road towards Mansa Devi Complex was completely flooded, so was Sector 20. The Panchkula Industrial Area and sectors around it were also flooded.

MOHALI: Worst hit; residents to move to court against MC

Mohali was worst hit. Phases 1, 2, 4, 3BI, 3B2, 5, 6 and Sector 71, 70, people here underwent an ordeal literally. Vehicles were literally floating with people ‘rowing’ them.  Residents are planning to move to court against MC for their loss of property and agony caused.

The 200-foot-wide airport express road was the worst hit.

The road is known to become inundated with a drizzle, how could it survive Monday’s ferocity? The road turned into a river, with water entering deep into shops and houses.

What the Met Department says?

According to Met Department, yesterday’s 134 mm for the whole day was the highest this season and second highest for August ever. The highest being 241.6 mm on August 3 in 2004.

Surender Paul, Met Department Director shared, “This is the case of instant monsoon changes that are common in this season.”

He added,”We were expecting rainfall, but not with this intensity. It happened due to the confluence of monsoon winds coming from the hills and western disturbances, which brought the rain clouds from Sirmaur and Solan to the northern foothills. We are expecting more rain in the week ahead, but of moderate intensity.”

As per Hindustan Times report on MC’s preparations to deal with monsoon this year, the officials had the following to say:

THEN: “The city will be ready to beat monsoon blues by June 30. More than half of the road gullies have been cleaned. ”

NOW: “This type of situation has occurred after 13 years. We have to bring level of all rivulets and nullahs down.”

THEN: Executive Engineer, Jagjit Singh Dhami said,”There is no structural problem in Mohali. 90% of road gullies have been cleaned. Water drains within 15 to 20 minutes.”

NOW: Rajesh Dhiman, MC commissioner said,”Every drainage system has its fixed carrying capacity. Mohali is not equipped to handle such a heavy rainfall.”

PANCHKULA
THEN: Shaleen Kumar, MC Commissioner said,”The civic body has hired private agencies to clean and maintain the road gullies. We will ensure that there is no water-logging.”

NOW: Upinder Kaur Walia, Mayor said,”Instead of cleaning the road gullies, the contractor , who has been paid Rs. 1.2 crore by the MC, has created more mess in the city.”

What the experts have to say?

The experts in urban planning and intellectuals blame plethora of factors for the unprecedented flooding in tricity yesterday. Poorly maintained drainage system and unplanned haphazard growth in the city’s periphery being the biggest factors.

Chandigarh’s traffic police was all on-toes to reign-in the insane traffic on roads yesterday. So much so, SSP (traffic and Security) himself came on the field managing traffic with his men.

There were also some good samaritans who stepped-up to help others despite inclement weather conditions. There were some places where traffic police was not on-scene, commuters stepped out of their cars to direct the traffic.

ChandigarhX urges the administration to reinforce the drainage system and keep an eye on real estate developers who often take these laws for granted which only leads to harrowing times like these.