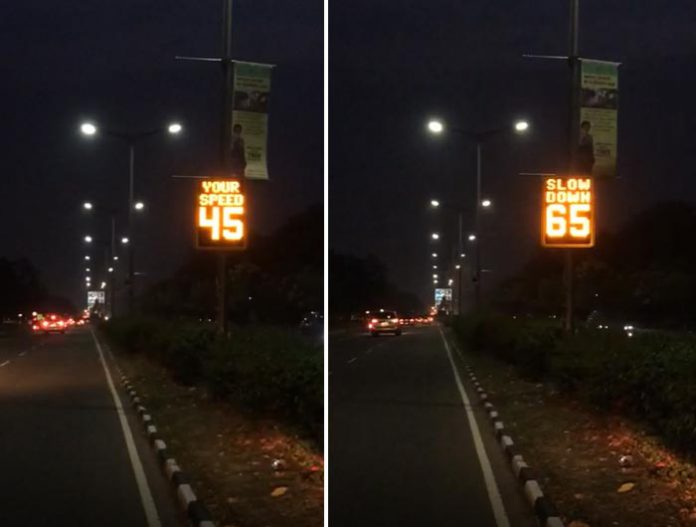 In a move that instills the drivers on road to reign in their speed within prescribed speed limit, Chandigarh traffic police has installed a radar speed sensor display board. The board is installed on Sector 9-10 road.

Radar Speed Sign Board is an interactive sign which displays the speed of the approaching motorists. It reads ‘slow down’ when the speed crosses the prescribed speed limit. They are equipped with night vision technology too and will records the speed of approaching vehicles. When the speed crosses the permissible limit a a white light will blink on the screen to alert the driver about the speed. The camera installed then clicks the picture of the speeding vehicle and send it to the concerned official. These cameras can click the image of the speeding vehicle even in heavy rain and dense fog. A challan will be sent to the driver along with the image of overspeeding vehicle.

Speed radar signs are a common practice in western countries where the administration takes resort to this as a traffic calming device. It slow cars down by making drivers aware when they are driving at speeds above the posted limits. This is used in addition to or instead of physical devices such as speed humps, speed cushions, speed tables, and speed bumps.

This is indeed a progressive step as it is a self-restraining practice. It inspires drivers themselves to take action rather than slow down in fear of challan.