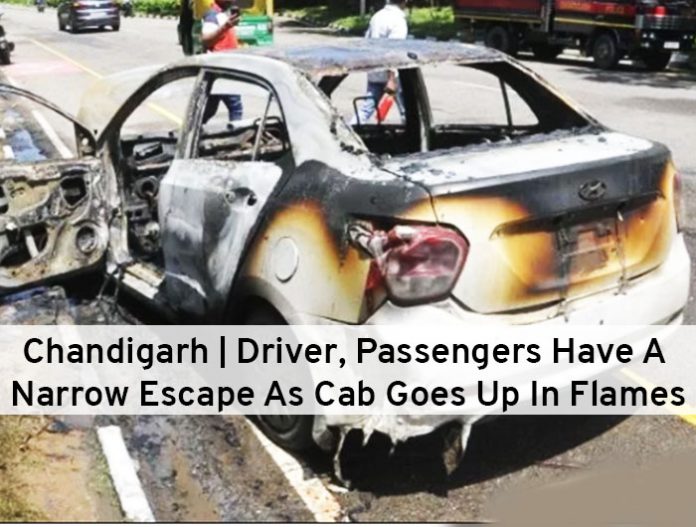 On Monday morning near Sector 5, a cab driver had a narrow escape after the car caught fire. Three passengers too are safe. The vehicle was completely burnt down. According to Sunil Kumar, car owner and driver, he reached near Sector 5 when he saw smoke coming out of the car’s hood. It was around 10:30 AM. Sunil Is a resident of Jind district in Haryana.

As it was an emergency, he came out of the car and told the others as well. When all of them were outside, Sunil took out the fire extinguisher from the car. He tried to stop the fire from spreading out of the engine but it became ablaze. Immediately, the fire spread to the interiors.

Sunil called up the Police Control Room. A PCR Gypsy parked in the next parking lot came for help. They called the fire station. Till the time fire tenders came and managed to stop the fire, everything turned to ashes. Only the frame was left behind.

As per Sunil, the reason is yet to be ascertained. It is a major loss to him. The car was his only source of bread and butter.

There was no loss of life or injury reported. The investigation is on. The reason is stated to be a short-circuit inside the car engine.