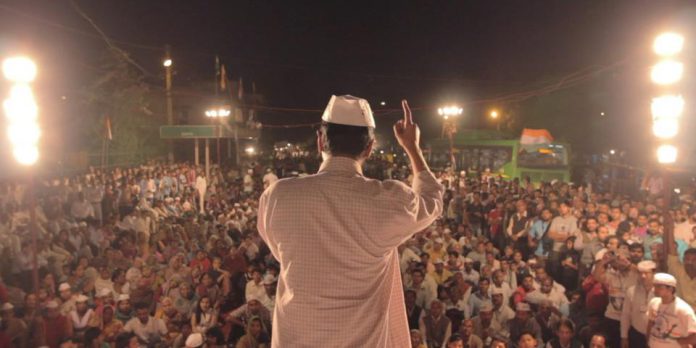 Politics enthusiasts or not, AAP fan or not, AN INSIGNIFICANT MAN is a must watch for every common man who has (or once had) A belief in democracy, the ‘by the people, of the people and for the people’.

If you thought that it was a ‘propaganda film’ and an ‘image makeover attempt’ by the Aam Aadmi Party, then watch it to be proven wrong.

Just a few years ago, we saw history being streaming live on our TV screens and newspapers. The country’s emotions were as charged as it were, as we have read in our history books, during 1940’s Quit India movement against British colonial rule. A single man’s vocal protest against corruption and demand for Lokpal brought every Indian under its banner and a ‘benign’ protest turned into a movement, fight against corruption. From Maharashtra’s sleepy town to the national capital, the movement’s slogans, banners, rallies caught everyone’s imagination.

The 90-minutes long documentary-styled film, An Insignificant Man, relives the same time when Indians came together to raise voice against corruption and made loud and clear to those drunk in ceaseless power that ‘ENOUGH IS ENOUGH’. This is an inside-story of ‘fight against corruption’ becoming a political force, a political party (Aam Aadmi Party) and victory in Delhi elections, 2013. This is a story of political parties’, political leaders’, media houses and people’s changing perspective during the course. It is a honest story of Yogendra Yadav, the pseophologist-and-academician-turned-politician becoming this era’s Chanakya planning and strategising from the right look of posters to exact words and emotions that were to be reflected in Kejriwal’s campaign (in 2015, Yadav was expelled from the party for “anti-party” activities and he later founded his own party, Swaraj India). This is a story of rise an ‘insignificant’ ordinary man, a bureaucrat turning into an activist to political leader to Chief Minister of Delhi, Arvind Kejriwal.

“Revolutionaries may make great lovers but are terrible husbands,” says one opponent dismissively.

Khushboo Ranka, a respected screenwriter who has earned the repute of most honestly portraying the grass-root voice on-screen in her documentaries, has again delivered a masterpiece with Vinay Shukla, a film writer (best known for his award-winning ‘Godmother’) whose passion to venture in the unchartered territories of storytelling onscreen has infused fresh lease of life in Indian film industry.

They had 400-hours of content with them, not even once you feel tricked of being made to swallow any lies. We had seen this all on television, read about it all in newspapers and magazines, yet the film keeps you gripped reminding you the not-so-distant time when high ideals of democracy came true. People’s power shook the very innards of political stalwarts and redesigned the way the politics was conceived earlier. Aam Aadmi Party became a hope for young disenchanted Indians who had given up hopes on transparent and responsible democracy in the country. Youth, completely unconnected to political parties, came forward became volunteers, members of AAP and demonstrated decentralized and participatory governance.

‘An Insignificant Man’ gives a sneak-peek into the working of politics and what a herculean task it is to infuse honest measures into the system.

Politics is no Litmus paper test. It cruelly puts good people to tests. You will watch Yogendra Yadav and Arvind Kejriwal going through these cruel tests. But, success and failure in this case is no self-evident. It is a subjective decision, left for the viewers to decide.

You love romantic stories, ‘An Insignificant Man’ is poetic portrayal of the phase when idealism became a national romance and so very true it was, that politics in India is never the same now. You love politics, you will find real-life hard-core insight into Indian politics. You love drama, there is such an adrenaline rush when you realise that we did change politics once and we can do it again. We are the change. The power lies with us.