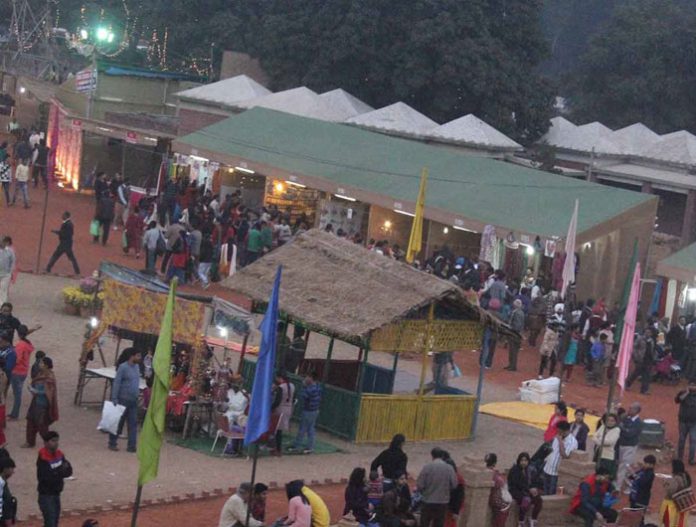 Who knew that the meager Aloo Parantha that you have everyday for breakfast, could play an important role in bilateral relationships? But this is what seems to be the case for Afghan businessmen. They are in the city for displaying their goods in the National Crafts Mela in Kalagram.

It seems that they have developed an affinity for Aloo Paranthas. They are happy when they get a chance to chomp on the potato-stuffed bread.

Md Abid Yosufzai, a businessman from Afghanistan, has visited Chandigarh for the first time for the National Crafts Mela. He heaped praises on India and the support they were providing to Afghanistan.

A handmade carpet businessman, he has the perfect pedigree when it comes to selling his goods. He has recorded good sales in the Crafts Mela. And, he is no novice at it. The seasoned veteran has been a regular in fairs organized at Delhi. He has been visiting India for the past sixteen years.

Shamshula and Mortaza Azizi, who deal in lapis lazuli jewellery and leather goods respectively, were singing along the same lines. They were enthusiastic about the trade relations developing between the two countries.

How Trade Relations Between India And Afghanistan Are Growing

President Ashraf Ghani recently visited India to meet our Prime Minister. A few days back, India had sent the first shipment of wheat to Afghanistan. Seven more shipments are to be sent by early 2018. Foreign trade in Afghanistan had been badly hit due to the Taliban insurgency and terrorism.

About National Crafts Mela at Kalagram

The National Crafts Mela at Kalagram had begun on Nov. 2 and will end on the Nov. 12. This year’s theme is Dadra and Nagar Haveli.

Specific importance has been given to flagship campaign,’Ek Bharat, Shreshtha Bharat’. The theme, ’Bharat ko jaano, Bharat ko pehchano’ is a highlight of the crafts mela.

UT officials are enthusiastic about National Crafts Mela, as this is the first time Afghan Businessmen have visited the event.

Related: 5 Places in Tricity With The Best Amritsari Naan