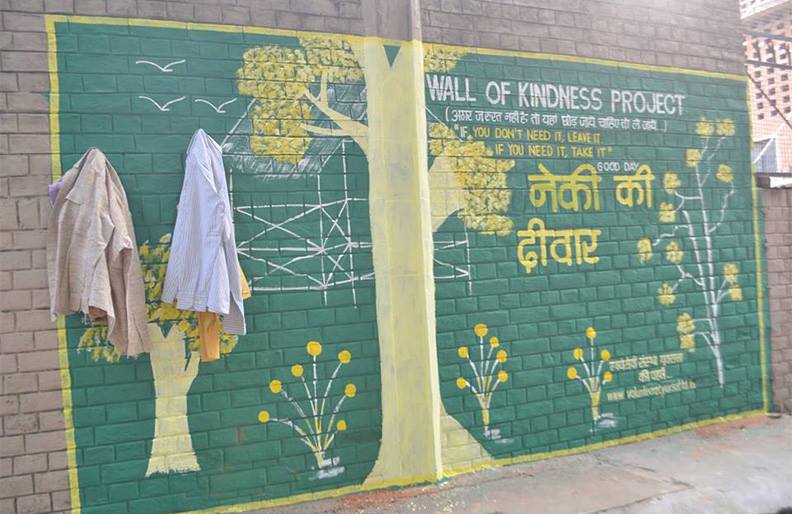 Walls have always been symbolic of divisive lines, a sense of personal ownership and stood against the spirit of camaraderie until an anonymous humanitarian turned it into an emblem of ‘random act of kindness’.

Amidst the dark clouds of despair hovering in Iran, an unknown man’s kindness became a sterling lining when he started hanging clothes and other things on a wall to help his poor countrymen and soon the whole country started replicating the same, setting example of brotherhood and compassion.

Gradually from Iran, it spread to many other places including Pakistan, China.

In India, many such examples of kindness have come up in various cities for instance, Bareilly, Varanasi, Bhilwara, Delhi, Noida, Bhubneshwar, Kolkatta, Agra and many many more.

Here in Chandigarh, an NGO upholding Gandhian principles of peaceful and harmonious co-existence, Yuvsatta, inspired benevolence amongst Chandigarh residents and gave them a convenient medium to help the needy. In association with Chandigarh schools, the NGO set up ‘Wall of Kindness’ or ‘neki ki diwar’ outside schools, with a slogan ‘leave if you do not need, take if you need’.

Started in September, 2016, the campaign has already been adopted by hundreds of students in various schools and institutions across Chandigarh. Carmel Convent School, Dev Samaj College of Education, St Joseph School, St Stephen’s School, Dev Samaj School and the Government Girls Model Senior Secondary School in Sector 18, Children’s Centre-Kitabghar in Sector 26 are some to mention. People in some private homes have also shown initiatives on this front at a smaller level.

Now, government school authorities want to extend it to individual classes. “We have planned to assign a ‘Wall of Kindness Week’ for each section of the school, so that throughout the year, the students get involved in this activity to help the needy.”, said Raj Bala, Principal of the Government Girls School in Sector 18. The Education Department officials in Chandigarh are also lending their support to the campaign. Education Department Deputy Director Chanchal Singh voiced his thoughts by saying, “This is a good campaign. It becomes more significant during the winters, when many economically poor can’t afford good woolens to save themselves from the chill.”

Tricity, turn a wall into a ‘wall of kindness’ in your neighbourhood. Join in and let the needy know that they are not the neglected and the forgotten lot. We do care for them.