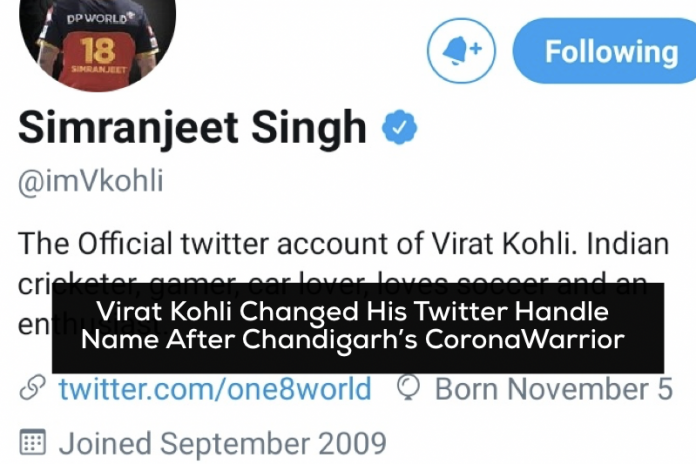 Later on, he will wear Simranjeet’s name on his jersey during one of the matches of the IPL 2020.

Royal Challengers Bangalore has decided that it’s team members will wear the jerseys portraying the name of a CoronaWarriors paying special tribute to off-field heroes.

Who is Simranjeet Singh?

Simranjeet Singh, a resident of Sector-63, Chandigarh, is an inspiration for all. He took his education from Vatika Public School, Chandigarh, a special school for hearing impaired children. Later on, he joined the Home Guard Department of Punjab government in 2001.

Besides this, he has also played in cricket tournaments for the hearing impaired at the national-level.

Standing strong by the specially-abled, Simranjeet Singh and his friends, Nitesh Sharma, Vikas Jain and Anu Sehgal, raised more than ₹98,000 for deaf and hearing impaired persons during lockdown period in May-June early this year.

They distributed ration kits for the hearing impaired persons and children staying in different slums and Vatika Public School in Chandigarh so that no one sleeps hungry.

Simranjeet’s inspiring story tells us that specially-abled too can make their contribution to the betterment of community. Virat’s gesture is not just moment of joy for Simranjeet but also recognition to all others.