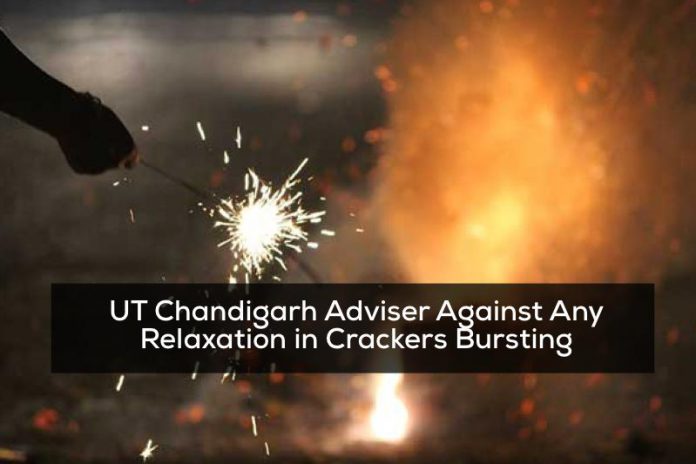 After the Haryana order of giving of providing 2 hours relaxation for bursting crackers on Diwali, UT Chandigarh Manoj Parida has clarified that no such relaxation is provided for Chandigarh.

Even on suggestions of allowing phuljharis, he maintained, “I oppose anar, rocket, red Chinese crackers, black snake tablets, all of which cause pollution. Even phuljhari should be banned. Only diyas are allowed. It is only for the benefit of people,” Parida said.

Chandigarh Administration had banned the sale and use of crackers to prevent second wave of COVID.

Just after two days of draw of lots to 96 cracker sellers’ stalls was held, the ban order had come. Chandigarh crackers dealers are clearly unhappy with the decision and have written to UT Administrator to review the decision as they had already spent Rs 1 crore on crackers. They have also moved the Punjab and Haryana High Court for relief.

On this, the Adviser had stated that during the draw of lots it was made clear that cracker licence was subject to their decision on ban.

The cracker sellers met city BJP chief for redressal of their grievances. They said that it was pointless to hold the draw of lots for cracker sellers when the UT was planning to ban sale and use of crackers. The ban won’t be of any use as Panchkula and Mohali will be bursting crackers and “won’t their pollution come to Chandigarh?”

Total ban on sale and use of firecrackers in Delhi NCR from midnight of November 9-30, which will be reviewed later.