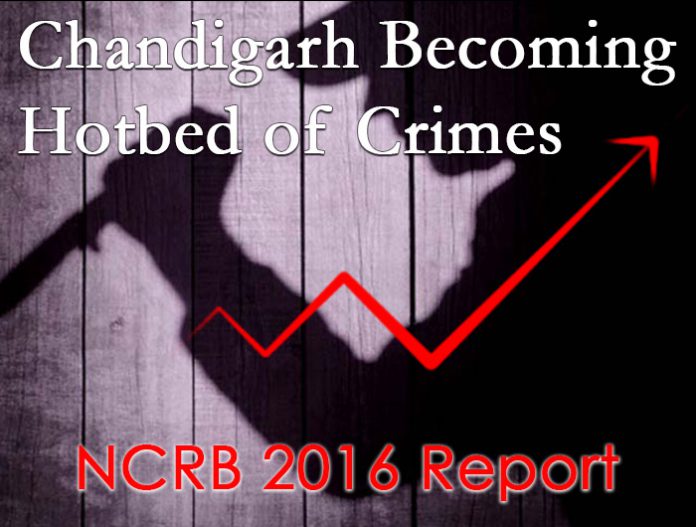 Can you believe it? Chandigarh has been ranked as the worst in India for crime against the elderly. National Crime Record Bureau (NCRB) rates the states and UTs according to the crime rates. In its 2016 report, which was released on Thursday, it has placed the UT Chandigarh on top (thus, worst) for crimes against senior citizens (people over 60).

What the NCRB Stats Reveal

The reports are dismal for the crime against elderly. But when it comes to the other crimes, the stats are equally repulsive. In fact, one is left to wonder how the city is reeling under the burden of crime. Rapes, thefts and murders have become common in the Tricity.

Here are what the NCRB stats reveal –

When it comes to crime against women, as many as 68 rape cases were reported in Chandigarh in 2016. But a more depressing fact is, in 64 of these cases the victim was violated by a known person (The main accused was a relative in 7 cases. In 12 cases, the main culprit was the neighbour.)

In total, 737 cases are under the investigation of Chandigarh police. 323 cases were pending from previous years. Police have completed investigation in 412 of these cases. The chargesheet was submitted in 280 cases. Conviction was made in 52 of these cases. However, the crime against women has seen a drop of 11%.

In 2015, there were 271 cases reported in this category. Again a drop was noticed in 2016 where only 222 cases were reported. Of these, 145 were kidnapping and abduction cases and 46 were cases of forced girl marriages. 114 people were convicted in these cases.

It seems that the city is becoming a hotbed of crime and scandals which has been beautifully camouflaged by the beautiful flowers and mind-blowing architecture. But all is not lost as the law enforcers are tightening their noose on criminals.