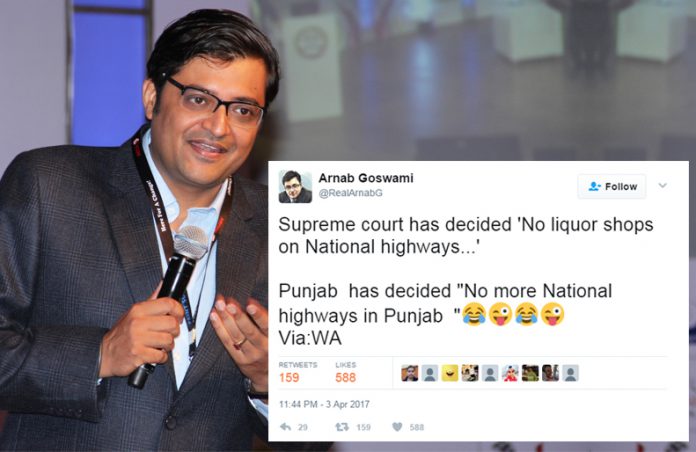 December 2016, Indian Supreme Court gave a landmark verdict to control road accidents on highways. The judgment banned serving of liquor within 500mts of state and national highways post March 31, 2017. It highlighted the easy availability of liquor around highways as the prime reason of road accidents due to drunken driving.

The judgment has received mixed public reactions. With many cheering it as a progressive step to ensure women’s safety on roads, checking domestic violence and maintaining public health, others are fuming with anger for hospitality sector being hit, employment opportunities going down and loss to state exchequer.

But, we Indians always manage to find a reason to laugh whatever the situation is.

Similarly, the twitterati has gone crazy over the judgment with quirky tweets all over and the internet world can’t get enough of them.

You too have a hearty laugh.

Waiting for some clever state to circumvent the highway liquor ban by passing a law redefining the metre as one-tenth of an inch.

Supreme court has decided ‘No liquor shops on National highways…’

Punjab has decided “No more National highways in Punjab “????
Via:WA

Those roads will just be called ways now.

Temporary bar at 501 Mtrs from the Highway. pic.twitter.com/3mFcjkbBkh

Always the wittiest one!

Funny. Cyber Hub guys changed the entrance to Front Side to show that Entry is 1.2 Kms from Highway hence No ban.. Man India is amazing

SAVING THE BEST FOR THE LAST!

Archaeologist to boss: The large number of alcohol bottles clearly prove this was an old highway, circa 2017.