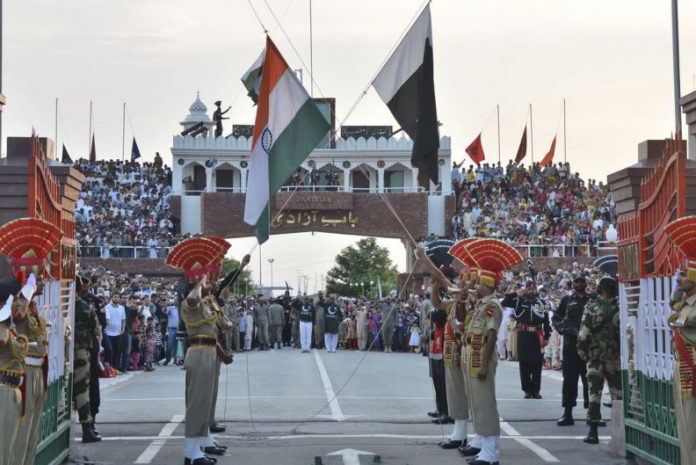 Attari international border has always invited huge tourists for the military showmanship during the ceremonial retreat march during border closure and lowering of national tricolour for the night. More than patriotism, it is the competitiveness that runs high in the spectators to outdo Pakistanis in marching, flag-folding, chest beating, forceful stomping and high-stepping. The border boasts the tallest flagpole. But here too, ‘lets-see-who’s-highest‘ has crept in.  ‘

With country’s Independence Day celebrations in view, tricolour was hoisted with its length and breadth reduced from its original size and weighed about 20 kg less on August 13, a day before Pakistan’s Independence Day. The same day Pakistani authorities hoisted their largest national flag on a 400-foot tall flagpole, 40-feet taller than India’s flagpole.

On Wednesday, the Amritsar district administration removed the Tricolour to avoid embarrassment and court further controversy. “We have removed the National Flag and will hoist it occasionally,” said Amritsar improvement trust (AIT) superintending engineer (SE) Rajiv Sekhri while talking to Times of India.

Sekhri also revealed that they were still awaiting for technical suggestions for hoisting the National Flag at Attari from state government’s home department . “Till then, we have decided to hoist it occasionally,” he maintained.

India had hoisted the flag on its tallest flagpole on March 5 and has been replaced four times since then.

It was found that the flag couldn’t withstand harsh winds and other weather conditions at that height. However, villagers living in the vicinity of Attari are unhappy with the decision of first hoisting it without conducting any feasibility study and then reducing its size, especially after Pakistan installed the tallest flagpole.

A young farmer in a village near Attari where National Flag was visible said, “Earlier, we felt proud when the flag was inaugurated but now it has brought us embarrassment. Our flagpole is without the flag whereas their’s is still fluttering.”
Source: Times of India
Image Credits: Google Images
Share on Facebook Share
0
Share on TwitterTweet
0
Send email Mail
0
Total Shares