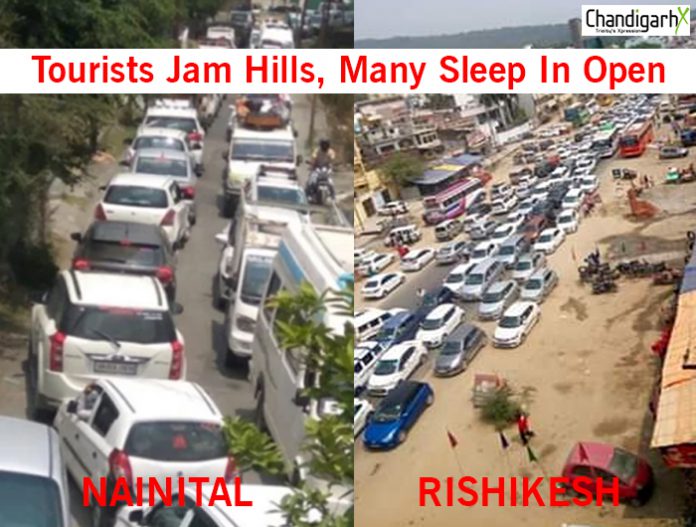 The temperature is crossing the 45 degrees Celsius mark already in most parts of northern India. Consequently, hill stations in Uttarakhand are witnessing an influx of tourist. This rush is mostly from Delhi, NCR. The situation worsened over the weekend as traffic stopped in Haridwar, Rishikesh, Mussoorie and Nainital. The unusually high footfall also resulted in chaos after hotels and guest houses in Nainital and Mussoorie ran out of rooms forcing travelers to take shelter at bus stands and on pavements. On most hill roads, snarls were witnessed. Traffic movement came to a grinding halt for over five hours.

In Haridwar, even as police regulated traffic movement and stopped entry of heavy vehicles into the city, 11 bottlenecks on the 4-km-stretch between Singh Dwar and Saptrishi caused a lot of inconvenience to tourists and locals alike. Highway construction work and traffic for Char Dham Yatra added to the confusion.

Abhay Singh, Haridwar circle officer said, “We are trying to ease the traffic flow by diverting vehicles from Roorkee towards Laksar. Roadways buses have also been stopped and parked at Rishikesh bus stand to clear the route. Auto-rickshaws have been barred from entering national highways. We are doing everything possible to clear the route at the earliest and heavy police force has been deployed to ensure that the directions are being followed.”

He added that a traffic inspector has also been suspended for negligence.

When tourists braved serpentine jams to reach Mussoorie and Nainital to take a break from the heat of the plains, they found that they were already booked over capacity. Several tourists then took shelter at bus stands and many had to spend the night on the pavements.

Mahesh Joshi, a resident of Dwarka in Delhi, said, “I was there in Nainital with my family for the past few days and I got really scared seeing the Saturday tourist rush. We got stuck in a jam for over five hours near Bhowali. Police diverted the traffic and we were stuck for another three hours. All day we were stuck in jams. We will stay the night in Haldwani if we get accommodation.”

Balbir, a local resident, said, “We saw young boys from good families sleeping at the bus stand near Picture Palace. I don’t remember witnessing such a sight here.”

Sunday saw a sudden dip in occupancy. Nainital senior superintendent of police Prahlad Narayan Meena said that despite the rush, the situation is under control. “On Sunday, at least 1,500 tourist vehicles reached Nainital. Since the city’s parking capacity is full, we have stopped tourists at different points.”