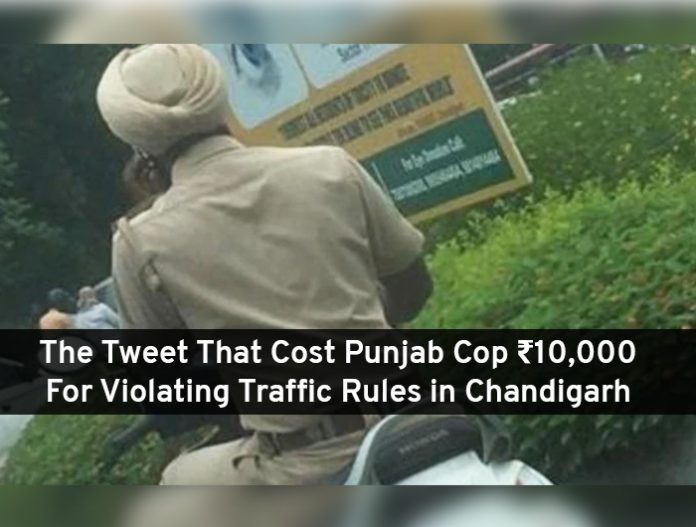 The new traffic rules under Motor Vehicle (Amendment) Act came into effect September 1. In the first five days itself, as per the data from the Chandigarh Traffic Police, 1,559 challans have already been issued. Among these helmetless riders top the list with 362 two-wheeler riders. In case of car divers, 175 were fined for not wearing seat belt.

There have been outbursts on social media against the hefty penalties. There is a fear of gross misuse of the revised fines and absence of check on erring cops. However, Chandigarh Police has proved otherwise by issuing a challan to a senior cop when found driving a two-wheeler on expired insurance and talking on the mobile phone while riding.

Punjab police ka hall.. seems inke liye traffic rules bane he Nahi.. rules should be equal for all.
1. he is talking on phone while driving
2. Vehicle insurance is expired..

A social media user posted this video of a cop using his mobile while driving and tagged SSP, Chandigarh Traffic. Shot on September 5, the officer was seen on the dividing road of Sector 9 and 10, Chandigarh.

Identified as Sub-inspector of the Punjab Police, his complete identity has not been disclosed.  A challan of Rs 10,000 has been levied. The two-wheeler is registered in Patiala. The owner’s name is Gurmeet Singh. His vehicle insurance stated June 26, 2019 as the date of expiry. This means the police officer had been driving it without the mandatory insurance since over two months.

ChandigarhX appreciates Chandigarh Traffic Police efforts in including citizens in governance and making them their own watchdogs.