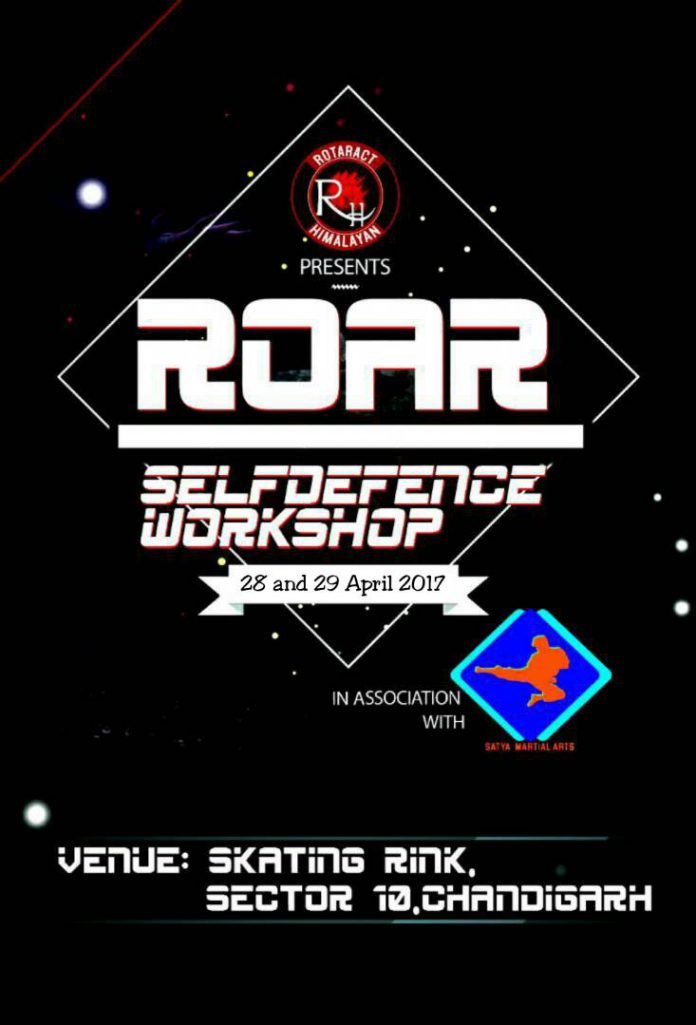 wound she took much more to heart
Did not leave her like she always was
A little spark had lit the fire in her
Fearlessly Independent she went out without her father, husband or brother

Rotaract Club Chandigarh Himalayan is back with another powerful event named ROAR– The Lionesss Voice.

Earlier they had conducted few social experiments concerning women’s safety which had sadly failed and thus they realized that women’s self defence is need of the hour. So a 2 day martial arts workshop was conducted which was a free of cost, open for all girls and 400 students from various schools of the tricity participated in the workshop.

The open for all workshop was held on 28th and 29th of April in association with an expert and professional instructor Mr. SATYAPAL NEGI (Unarmed Combat Taekwondo Club) who with his team taught the young damsels some easy tricks to defend themselves when the need arises.

Aim of Roar
The open for all Self Defence Workshop aims at making the young women of today self dependent and self reliant which is actually needed in the society at this point of time. The instructor would focus of the practical aspect of the workshop and will demonstrate some easy tricks by the means of which the girls can help themselves and their fellow being in tense situation. The workshop is powered by ROTARACT CLUB CHANDIGARH HIMALAYAN

It is a non profitable organization and is the youth wing or Rotary.
All around the year, Rotaract Himalayan conducts various events which help and which aim at social upliftment and betterment of society. The Himalayan spirit as they call it is depicted in all its events, be it Pirates of the city (a treasure hunt), Salsa Slam ( 3 day salsa workshop), awaz, Roshini, Futsal and many mmore all the amount of money is actually used for the making of Happy School as the organization has adopted 5 schools of the tricity and are full fledged caretaker of these schools.

So gear up ladies, and do attend the workshop organized by Rotaract Himalayan and the perks of attending it are:

*simple easy steps to save yourself
*free of cost
*only two hours on any of the dates 9am to 11am
*on the weekend. 28th and 29th April
* Venue Skating Rink of sector 10