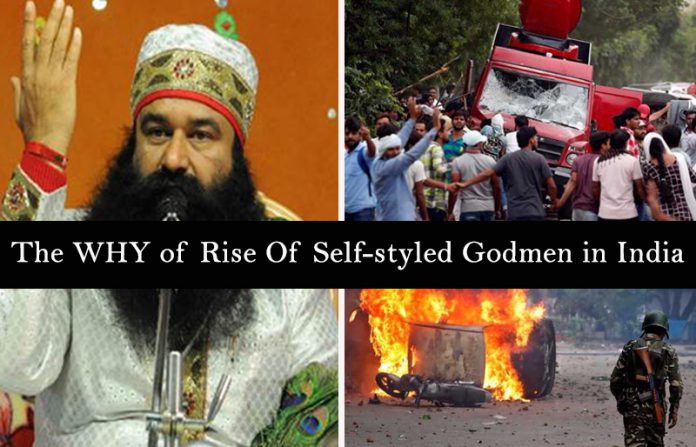 The article has been republished in The Huffington Post, United States too.
A land of fakirs, snake-charmers, rope-tricks, turbaned maharajas, holy cows… over seven decades of Indian independence, we are still struggling with the same rudimentary mindset that once Rudyard Kipling called “The White Man’s Burden”.
These are still the most disparaging, scathing and venomous remarks for any Indian. Boasting the state-of-the-art technology, especially in space science, we, Indians are in no mood of even having a mumble of these scornful words on our ears.
However, doesn’t the recent rampage following the verdict of self-styled godman in Panchkula (Haryana) point towards a different reality?

In sociology we are taught, India is a land of contrasts and paradoxes.

The paradox of world-class education co-existing with illiteracy and superstitions, democratic institutions with primordial institutions like khap panchyats, some of the world’s richest and poorest in one country, goddess worship and women fighting for equality and respect… I can go on and on… And I shudder everytime I write a word.
On 25 August, a CBI court held guilty Dera Sacha Sauda (Camp True-Deal) Chief Baba Gurmeet Ram Rahim Singh ‘Insan’ of raping his two sadhvis (female followers) in 2002. The victims wrote anonymously to Indian Prime Minister, state Chief Ministers and only then CBI investigations were initiated against the flamboyant Baba, who has five movies to his name; actor, director, songwriter, singer, music composer everything he does for his movies. (And please let me tell you his movies in north India give neck-to-neck competition to India’s heart-throb Shah Rukh Khan and songs are chart-busters.) Over ten years, investigation lasted, a news reporter was allegedly killed at his behest.
Finally, the Gurmeet Ram Rahim has been convicted. He has been sentenced 20 years of imprisonment, fined him Rs 30 lakhs. Of the Rs 30 lakh, Rs 14 lakh each would go to the two victims.
Yes, rejoice. It’s the ultimate victory of Indian judiciary; justice has been done, law has prevailed.
But, do you think it’s the end of it?
One baba goes, ten rise to fill in his void.

The real questions we must be pondering here are:
WHY baba culture is still so rampant here?
HOW the babas turn into a messiah, godman for millions of people?
LOOK CLOSELY
Who are the followers?
Do these followers wear any branded clothes or swanky hot wheels?
NO.
They are the poor, uneducated, unprivileged section of our society.  They are those who have been forced to live a life of destitution over the generations. Punjab and Haryana are the fulcrum of deep casteism in the country.
Let’s dissect Punjab first.
Though Punjab boasts being the most prosperous state in the country, with major chunk of Indian foreign exchange coming into the state; again here is the paradox of prosperity and poverty living next to each other. Sikhism preaches egalitarianism, but most sadly, over the centuries, it has become more of a text-book concept. The low caste Hindus who took refuge into the fold of Sikhism looking for equality and dignity still were rejected by the political nexus of ‘regal’ better-off classes.
Same is the case in Haryana.
The higher castes of Jats in Haryana jealously own the monopoly over all the privileges in the society.
And what’s left for the lowest rung? Nothing.
No education, no employment. Born as poor peasants and labourers and die the same.
Many sociological researches have pointed to the flip-side of the flourishing green revolution in the region- the deepening gulf, economic inequities among people and resultingly deprivations and disadvantaged status of the poor peasants. This section is rich classes’ unsaid bonded labour, politicians vote bank, drug peddlers’ market and seasonal NGO’s and social activists’ lab.
These are disillusioned, disenchanted, dejected, disgruntled and alienated people.
If anyone give such a dejected lot a hope of better and dignified life, do you think they would shirk off?
All these babas, self-styled godman exploit on these feelings, pose to offer them respect and dignity. Won’t he/she be any less than a messiah for them? Won’t these people blindly follow his/her directions as word from their God?
The mammoth number of followers that these babas boast only points to the simmering discontent in the society. More than anything else it warrants the exigency of bringing democratic rights equally to the downtrodden.
I’m, in no way, trying to rationalise the violence by the Dera followers in my city, but it pained me when reports came that out of those over hundred thousand thronged the city, majority were senile and were misled and brought to the town on the pretext of attending a sermon by Pitaji (as Baba Gurmeet Ram Rahim Singh was called by his followers).
History has many lessons for us to teach. New ideas, new cults, new sects have always arisen out of the heinous wounds of the downtrodden, but it’s upto us, the privileged ones, to decide whether we want to let these innocent souls taken for a ride by these unscrupulous people. Had every person given an equal chance to earn his/her living and live a dignified life, no godman could have exploited on anyone’s sentiments.
Ask for grave punishment for the furious mob that wrecked havoc on Friday, but better give a thought to how we have unconsciously contributed to growth of this preposterous baba culture and do think of ways of uprooting it now.
It’s already enough!
Share on Facebook Share
0
Share on TwitterTweet
0
Send email Mail
0
Total Shares