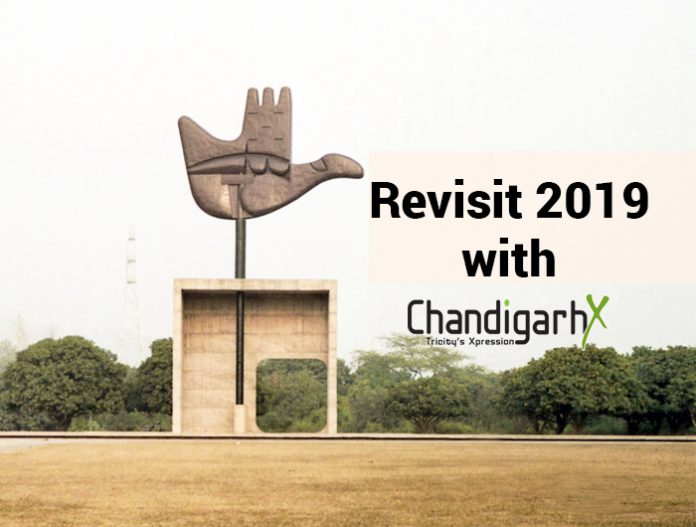 A woman journalist was allegedly viciously molested in Panjab University while on her morning walk. The brave woman fought her captors’ clutches with all her might and managed to escape. The incident brought women safety in PU back in question.

Intending to boost tourism, the Northern Railway started the Him Darshan Express on Kalka-Shimla route. It is a swanky seven-coach air-conditioned first-class glass-roofed Vistadome train.

Mohali administration decided to extend installation of smart traffic signal – Intelights – to four junctions from the Indian Institute of Science Education and Research (IISER) Sector 81 to Sector 68/69 light point. These were devised by the students of Chitkara University.

A study conducted by the Union Consumer Affairs Ministry found samples of tap water collected from Chandigarh non-compliant with the Indian standards for drinking water. The City Beautiful is among fourteen state capitals where tap water is ‘undrinkable’.

Chandigarh traffic police purchased six high-tech speed radar camera systems. These will be installed on accident-prone stretches in the city.

Pedestrian Underpass Between PGI and PU Coming Up

The construction of the pedestrian underpass between PGIMER and Panjab University was officially approved by Punjab Governor and UT Administrator VP Singh Badnore.

The ₹1,800-crore Tata’s Camelot Housing Project received thumbs down from the Supreme Court. The bench headed by Justice Arun Mishra held that it was well within the catchment area of Sukhna Lake.

Hill station Dharamshala was connected to Chandigarh for the first time via a 70-seater routine flight. The development came under the Government of India’s regional connectivity scheme.

Underpass Connecting Sectors 16 And 17 In Chandigarh Ready For Inauguration

Smart City’s first project- an underpass connecting the Rose Garden and Sector 17- was ready for inauguration in November. The 70 mt-long and 12 mt-wide underpass would allow visitors to go straight to Rose Garden without crossing the Jan Marg- one of the busiest roads in Chandigarh.

Fortis Hospital, Mohali started a unique cab and ambulance service to suit the disabled and senior citizens. Different from normal cabs, this service was customized to help patients in the wheelchair too.

In a pilot project, the Engineering Department, Chandigarh Administration provided road embedded traffic light signals adjacent to the parking lot of Sukhna Lake. It would provide a light actuated barrier to traffic and eliminate the possibility of an accident.

Ram Mehar Singh, a 59-year-old man was allegedly left inside the MRI machine unattended at Civil Hospital, Sector 6, Panchkula. The hospital administration accepted that the radiographer concerned didn’t pay attention in the last few minutes of the scan.

Sunil Sandhu, a cop in a video explained that a motorist had 15 days to pay the challan under the Motor Vehicles (Amendment) Act. Within that duration, if individuals produced the required documents to the authorities, they could get away by paying just ₹100.

189 Traffic Challans Pending Against Biker In Chandigarh, Many Issued Before He Purchased Vehicle

Sanju, city-based 21-year-old youth had been identified to have 189 challans pending against him. Accumulated between 2017 and 2019, they had been issued for various offences via Traffic Violation Information Slip (TVIS).

The Panchkula MC launched smart mobility cards to access the Public Bicycle Sharing (PBS) system, launched in August. These could be purchased at an initial price of ₹100.

Chandigarh Police issued a challan of ₹10,000 to a senior cop when found driving a two-wheeler on expired insurance and talking on the mobile phone while riding.

Now, Fly from Chandigarh to Hisar in 45 Minutes

Haryana CM Manohar Lal Khattar flagged off the state’s first Hisar-Chandigarh flight. This special initiative was taken to enhance regional connectivity under the guidelines of the UDAN scheme.

The Motor Vehicles (Amendment) Act, 2019 with 63 clauses came into force. These provisions relate to cases of drunken driving, driving without helmet, driving without seat belts, overloading and underage driving.

Rental Bicycles Available in Panchkula too. Pedal for Fun And Health

Under the Smart City Project, the Public Bicycle Sharing system was inaugurated in Panchkula by Manohar Lal Khattar, Chief Minister, Haryana. 20 different dock stations were fixed for residents to rent a bicycle at ₹5 for half an hour.

A lightning strike killed Tamanna, 19 years, at Sukhna Lake when she was strolling on the walking track. She was a resident of Barwala village in Dera Bassi.

The water level at Sukhna pushed to 1,161.55 ft, the highest recorded in the season. It increased by 2.55 ft in one day due to heavy rain.

The UGC, in its 542nd meeting declared a list of 20 Institutes of Eminence. Unfortunately, Panjab University failed to make up in the top 20.

After Penalty, Marriott Challaned For Liquor Bottles Without Hologram

During an inspection at JW Marriott Chandigarh, the Excise and Taxation Department seized 34 bottles of foreign liquor without holograms. The AETC issued a challan and a show cause notice.

Riding Without Rear View Mirror Will Land You In Trouble

As per Section 177 of the Motor Vehicles Act, challan would be issued to the person not having rear view mirror on their two-wheeler. One glance can save your life.

During the period from 2017-19, ₹50.73 crore was spent on recarpeting various roads in the city. But, the bumpy roads of the city were a sight of poor raw material, sub-standard work, and lack of monitoring.

Big square signs on slip roads on the Sector 32/33/20/30 roundabout were drawn to warn motorists not to halt vehicles and avoid congestion. The aim was to let them know from a stretch that there was a slip road ahead.

Sombir Deshwal, a UT constable saved a 38-year-old woman from drowning at a lake in Dhanas. The victim accidentally fell into the lake.

Shimla became easily accessible from Chandigarh by air for six days in a week (except Sunday). The one-way fare is ₹2,880 per person inclusive of GST.

The Iconic Student Centre At Panjab University Is Crying For Attention

The infrastructural glitches at Student Centre, Panjab University came to the highlight. From missing umbrella sheds, broken benches, stinking toilets to monkey menace, Stu-C was in dire need of renovation.

On the beginning of the 47th Rose Festival, the police decided to introduce road diversions near the Zakir Hussain Rose Garden. The stretch from Sector 16/17 light point up to Matka Chowk on Jan Marg was closed for vehicular movement.

Huge Traffic at Parwanoo as Himachal Opens Borders for Tourists

Shops Can Remain Open till 9pm in Panchkula, DC orders