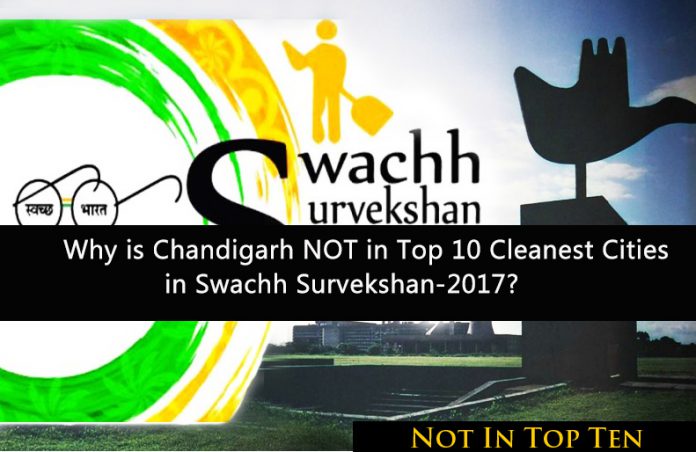 May 4, 2017, Union Minister of Urban Development Venkaiah Naidu announced the results of Swachh Survekshan-2017 and everybody in the tricity was sure of Chandigarh winning the coveted title. But, to the shock and surprise of everyone, Chandigarh did not even figure in Top 10 cleanest cities in India out of 434 surveyed on cleanliness index. Chandigarh has slipped from 2nd last year to 11th in the survey this year.

(Swachh Survekshan is annual survey under Swachh Bharat Mission – Urban (SBM-U) conducted by the ministry of urban development to encourage the cities to work on cleanliness drive bringing a friendly competition amongst them.)

The disappointment is visible on every city beautiful lover’s face and the MC Chandigarh is busy retrospecting where it has lagged behind.

The reasons for plummeting Chandigarh rank:

What the officials have to say?
Officials did their best

Facilities such as mobile toilets were provided. Officials did their best. Had residents come forward for the survey, the position would have been better. — Asha Jaswal, Mayor

The MC has done its best and even scored highest marks in two categories. It was residents’ poor response that resulted in the slip. — B Purushartha, MC Commissioner

The sanitation has gone from bad to worse. Officers believe in meetings. the city lacks infrastructure to keep it clean.  — BS Bittu, FOSWAC Chairman

Do voice your opinion in the comments section where you think the city has lagged behind and any suggestions you have to improve.