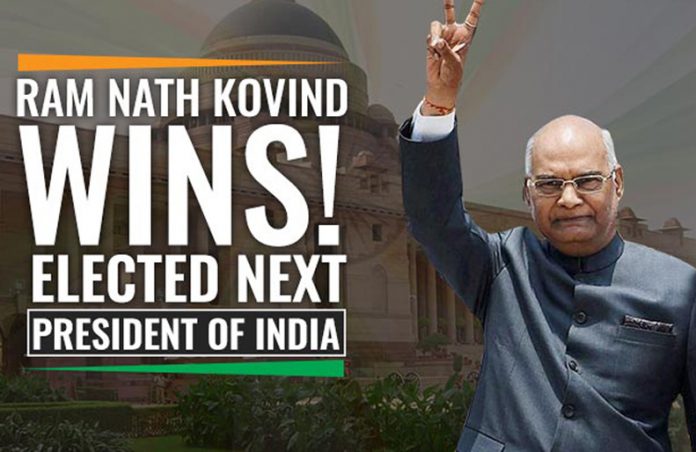 With an overwhelming majority, Ram Nath Kovind has been elected as India’s 14th President.

The 71-year-old former Governor of Bihar, who will be the second Dalit to hold the top constitutional position, received 2930 votes with a value of 702044.

The Vice-Presidential election will be held on August 5. While former party president Venkaiah Naidu is the NDA candidate, former West Bengal Governor Gopalkrishna Gandhi is the Opposition pick.

About the Composition of Electoral College

The President is indirectly elected by the electoral college. The Electoral College comprises Members of Parliament and members of Legislative Assemblies of all the States. A total of 4,896 voters — 4,120 MLAs and 776 elected MPs — were eligible to cast their ballot. MLCs of States are not part of the electoral college. While the value of an MLA’s vote depends on the population of his or her State, the value of an MP’s vote remains the same at 708.

The office-holder serves for a term of five years; there are no term limits. The oath of the President is taken in the presence of the Chief Justice of India, and in his/her absence, by the most senior judge of theSupreme Court of India.

Who is Ram Nath Kovind?

♦ After graduating in law from a Kanpur college, Kovind had gone to Delhi to prepare for the Indian Administrative Services. He failed to pass it twice but made it in third attempt. He, however, did not join as he was selected for the allied services and started practising the law. He used to practice in Supreme Court and Delhi High Court.

♦ Married to Savita Kovind, Ram Nath Kovind has a son Prashant Kumar, and a daughter, Swati.

♦ He entered politics in 1994 when he became a member of Parliament in Rajya Sabha from Uttar Pradesh and served as an MP for two consecutive terms till 2006.

♦ In 1977, Kovind had worked as the private secretary of then Prime Minister Morarji Desai. Later Kovind had also served as national spokesperson of BJP.