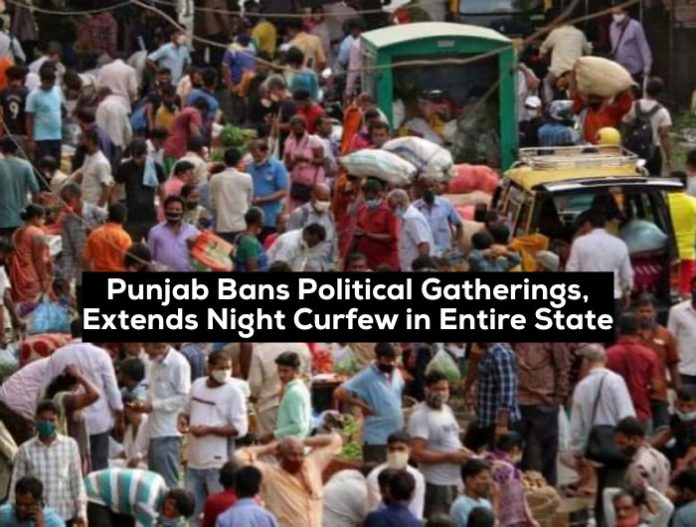 Amid rising Covid cases in Punjab, 85 percent of which are of the UK strain, which is more contagious and virulent, state Chief Minister, Capt Amarinder Singh, has ordered fresh slew of restrictions:

Political Gatherings: Total ban on political gatherings till April 30; violators, including political leaders, will be booked under the DMA and Epidemics Act.

Night Curfew: The night curfew hitherto imposed in 12 districts has been extended to whole state from 9 pm to 5 am.

Attendees in Gatherings: Number of attendees at funeral/cremations/weddings reduced to 50 people indoors and 100 for outdoors.

Masks: Wearing of masks has been made mandatory for all government employees while in office.

Malls: Providing some relief to shop owners in malls, the fresh order has allowed entry of 10 people per shop at any given time. Earlier order had put the cap of not more than 100 people in a mall at one time.

Cinema Halls to operate at 50 percent of seating capacity.

The Punjab Chief Minister said that no social, cultural or sports gatherings and related functions will be allowed till April 30. Online and modes for grievance redressal shall be encouraged; in-person public dealing shall be restricted in all Government offices. He also underlined that citizens should to be encouraged to visit public offices only for essential services and the concerned departments should issue instructions for limiting daily appointments for works like registries etc.

Taking a tough stand on political gatherings, he said,”How do you expect people to be serious about the spread of the disease if senior political leaders behave like this”. He has ordered the police and the districts administrations to register cases against the not just the political leaders, organizers and participants of political gatherings under DMA and Epidemics Act, also the owners of the tent houses, who provide the infrastructure for such gatherings, venue owners, who would provide space for such events. The venues will be sealed for three months.