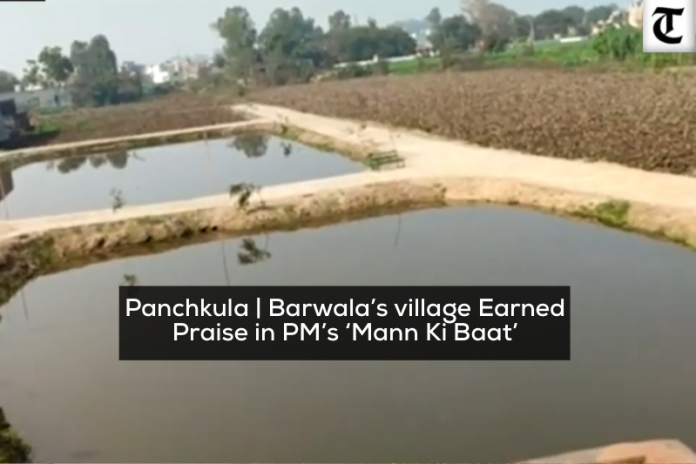 A small village in Batour block of Panchkula’s Barwala was happily surprised when it got mention in PM Narendra Modi’s monthly radio programme, “Mann Ki Baat”.

Duly appreciated for its ingenious way to treat waste water that made the village inhabited by marginal farmers self sufficient in irrigation needs and reduced dependency on fertizers.

Batour village had been grappling with sewerage water issues for years. In 2016, the newly elected panchayat came up with a five-pond system to deal with it.

Talking about the five-pond system and it’s benefits, Laxman Dass, the village sarpanch said, “We decided to adopt the five-pond system, wastewater stabilisation ponds (WSPs), to resolve the issue. Under the technology, five compartments or ponds were built where the sewerage water generated from all houses is taken for treatment.”

The sewerage water purification begins at the first pond where floating material is separated from the wastewater. Then, it passes through at least three ponds before being transferred to the fifth or maturation pond.

Here on, water is fit to be used for irrigation in the fields through motor pumps, whose direct beneficiaries are marginal farmers who depended heavily on tubewells earlier. The village also earns revenue by leasing out ponds on lease for farming. The revenue is then used for village development works. Even the dependency on fertilisers has cut down as water is of good quality.

The Prime Minister, in his address, said: “Batour village was facing the problem of drainage. Because of this, dirty water had accumulated in the region and diseases were spreading. However, residents recognised an opportunity even in the wastewater. The panchayat started filtering the dirty water coming from the village after collecting it at a spot. The filtered water is now being used by farmers of the village, thereby liberating the region of pollution, filth and diseases and irrigating the fields also.”

Haryana Speaker and local MLA Gian Chand Gupta congratulated village representatives for their efforts to develop the region. “The acknowledgement by Prime Minister Narendra Modi Modi has brought the village on the national and world map,” he said.