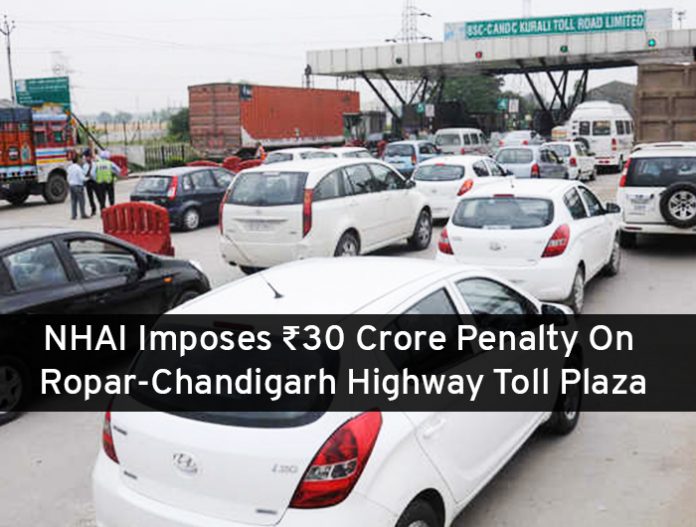 The National Highway Authority of India (NHAI) levied a fine of Rs 30 crore on the Solkhian toll plaza for violating maintenance norms. The stretch from Kurali to Kiratpur Sahib was under consideration here. The company has been running the project for two years.

Dinesh Chadha, Ropar-based advocate and activist procured information under the RTI Act. He said that tax for this road was collected at Solkhian toll plaza on Ropar-Chandigarh Road. BSCC and C Kurali Road Toll Private Limited were in charge of this.

What does Solkhian toll plaza say?

As per the toll plaza manager, Uma Shankar Aiyar, 70 percent of the work on the road had been completed. The remaining 30 percent would be finished soon. It was pending due to a shortage of funds.

The repair was supposed to be done by 2016. Despite constant deadlines by the NHAI, it has not been implemented so far.

Demanding suspension of toll collection, Chadha added that on October 18, 2018, NHAI had written to the Solkhian toll plaza stating that it had not undertaken repairs. Therefore, the agreement was violated. So, it was right to suspend the collection of taxes. But no action had been taken so far. On August 8, 2019, the NHAI sought damages of Rs 29.95 lakh from the company. But as per the previous year’s letter, its right to collect toll tax should have been suspended.

In 2016, NHAI conducted an inspection. They had asked the toll plaza company to fulfill the requirements of operation and maintenance.

Their findings included the following:

Under the NHAI, the condition of the Nakkia toll plaza was also the same. Located on the Kiratpur-Nangal road, the stretch is in a dilapidated condition.