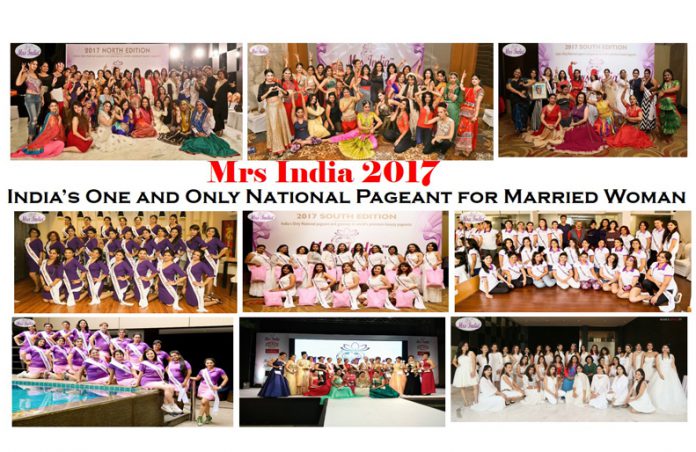 ‘Beauty is skin deep’ but very few in the world practice this and the glam world, none can’t even dare to think.
However, there’s a beauty pageant that not only holds the mantra close to heart but practice it as well.

Mrs. India Pageant, the One and only contest in the India for married woman and only platform which provides a gateway to international platforms like Mrs. Asia International, Mrs. World and Mrs. Planet.

Over the year, the pageant held momentous events across the country to let the married women showcase their beautiful selves in their unique talent and personality. Now having selected the best amongst the best, Mrs India is now ready for Nationals of Mrs. India 2017 on 4th July at Chennai at Raison Blue City Centre Egmore.

Founded by Ms. Deepali Phadnis, Founder of Mrs. India and former Mrs. Asia international, Mrs. India is the only beauty pageant for married women in the country allowing them to come together in a celebration of not only their beauty, but their Talent ,Glamour and Culture .

Winners of all above Mrs India 2017 Pageant will enter into the final round of Mrs. India 2017 to be hosted on 4th July at Chennai at Raison Blue City Centre Egmore.

The Long Journey of Finding the Mrs India

Mrs India 2017 has a long steady and defined process that carefully scrutinize women to find the right and perfect woman for the coveted title.

Mrs India received tree thousands of entries for Mrs India 2017 out of which Mrs India Selected only 100’s Semifinalist .These semifinalist competed in different Zones for to Win titles of Mrs India North 2017 ,Mrs India South 2017 and Mrs India West 2017.

Mrs India conducts various photo shoots theme based this year’s theme was ‘Angels in Purple pink’ which matches our Logo as Goddess are always adored with flowers. The whole idea behind the photo shoot was to instill in them the confidence to face the camera. These portfolios will help them to preserve memories at the same time help them in future.

Winners of Zonal and State level contestants along with wild card entry only from semifinalist will be participating in Mrs India National finale. Contestants will be evaluated through various rounds from personal interviews, public speaking, evening gown, traditional wear, and fitness wear rounds.

Being Beautiful is joy but representing your nation eternal pride, making your family proud is priceless.Mrs. India is Celebration of Beauty in Diversity of Womanhood who is Eternally Beautiful.

Mrs. India 2017 will be hosted on 4th July at Chennai at Raison Blue City Centre Egmore.