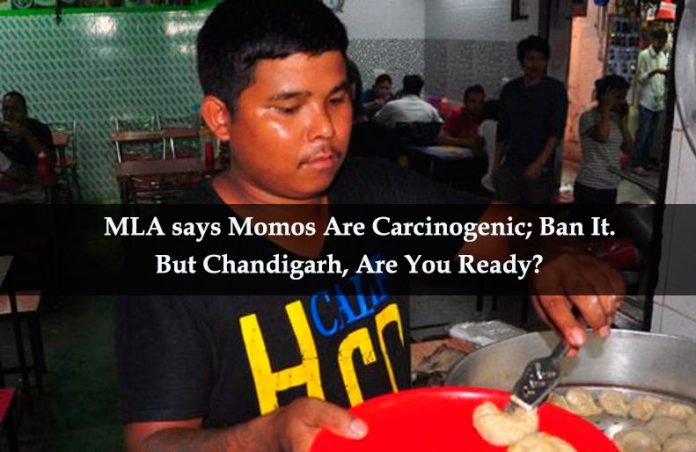 Recently a lawyer and a BJP legislator in Jammu & Kashmir, Ramesh Arora raised a call to ban momos for five months for the reason as he says it contains carcinogenic monosodium glutamate or Ajinomoto. But, are we, the momos lovers in Tricity, are ready to give up our favourite munching snack so easily?

Momos traveled from north-east of India to Punjab and has won over our hearts the steamed dumplings usually filled with chicken, have been reinvented to suit the Punjabi palate so much so that today there are more than 15 varieties to choose from. They include the popular paneer momos, tandoori momos, cheese momos, keema momos, and fried momos. There are wheat momos for the health conscious and chocolate momos for those with a sweet tooth.

The steamed dumplings that the ingenious chefs in Punjab have reinvented the momos in over 15 varieties, veg, cheese, chicken, tandoori, keema, fried… We even have wheat momos for the health conscious and chocolate momos for those with a sweet tooth.

But Arora, a member of the J&K legislative council says they are the root cause of life-threatening diseases, including cancer of the intestine.

Let’s see how Chandigarh is responding to it:

“Momos feel like food family. There’s no question of banning it,” says Bhawni Trivedi, 19, a student of journalism. “I wonder how the original momo tastes after sampling so many alternatives,” she says.

Mohan Lal, who owns a small stall in Chandigarh’s Sector 35, says, “Almost all dishes made in the market need a pinch of Ajinomoto to enhance their flavour. The plea should be to minimise their use not ban them.”

Agreeing with him, Palak Kaushal, 20, a law student of Chandigarh, says, “You can discourage consumption not ban momos.”

Ate almost everyday and trust me the headache is now an everyday issue with me. He is not moron. Dog meat being used in momos in delhi.

I am surprised they also didn’t say Momos cause rape.

Every day, a new BJP hero emerges, who puts all other party members to shame. Today’s winner – https://t.co/UTKZdQ3IZC

One wrong delivery from Asian/ Tibetan restaurant and a nincompoop declares war on momos. Sir, please stick to naan and butter chicken.

Now this gov wants ban on MOMOS. In coming yrs may b we will eat grass-leaves.#3साल_किसान_बेहाल #शिवराज_का_शवराज https://t.co/TqBcxWLshj

What do you think? Share your views in comments.