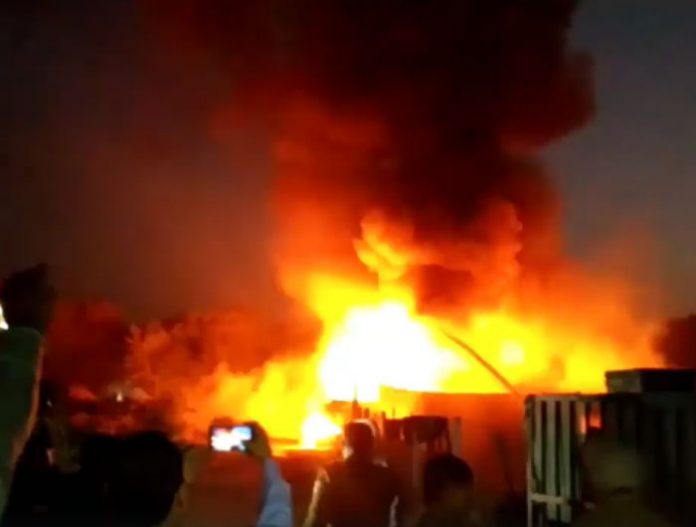 On Thursday evening, a raging fire wreaked havoc at a chemical godown at Shastri Nagar fish market, Sector-26, Chandigarh. No casualties have been reported so far.

The fire department received the call at 5.30 pm. Two fire tenders were dispatched from Manimajra fire station to control the blaze.

Short Circuit Was The Cause Of The Fire

The fire broke out due to a short circuit at the meat shop, which led to a fire in the chemical godown. The godown had thinner, an inflammable substance, which resulted in the fire. Finally the flames were doused at 8.30 pm.

No Casualties Reported Due To Timely Intervention Of Fire Officials

No casualties were reported in the major fire outbreak. However there has been loss of property.

There were three big explosions. The containers containing chemicals had burst emitting a lot of smoke. The godown had stored 10 drums of ethyl acetate -2000 litres in all. The fire started after the chemical caught a spark from the cardboard.

Satish Garg, the proprietor of AG Chemicals, stated that Rs 1 lakh cash, a cheque book and some other valuable documents were destroyed in the fire. The exact loss of property was still to be assessed.

The godown was used to store chemicals. The ethyl acetate was manufactured at a factory in Derabassi.  The Shastri Nagar godown was the supply point.

Three Employees Were In The Godown When The Incident Occurred

Three employees, Tribhuvan, Radhay and Raja were in the godown when the first explosion occurred and the fire started. After the fire broke out, one of them informed the fire department, police and the owner of the godown. This fire also caused a major traffic disruption.

Source: The Indian Express, The Tribune & Times of India

Also Read: The Mighty Bullet To Join The Firefighting Force In Chandigarh