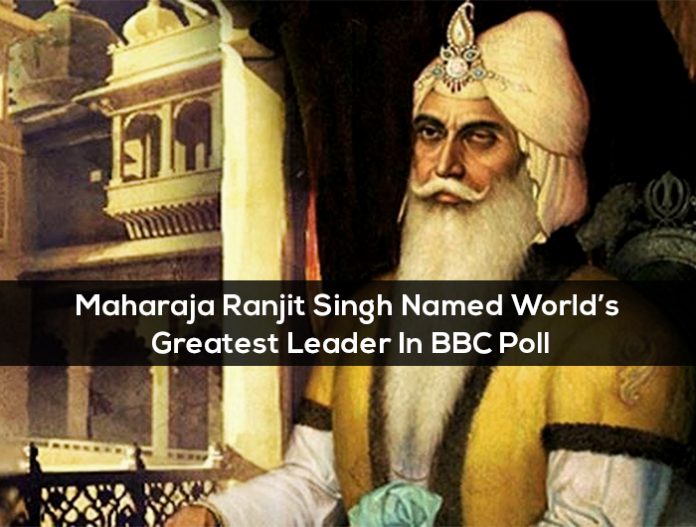 The founder and ruler of the Sikh Empire in India, Maharaja Ranjit Singh has been voted to be named the “Greatest Leader of All Time” from around the world in a poll conducted by ‘BBC World Histories Magazine’.

Polling more than thirty-eight percent of the votes, Singh was praised for creating a new tolerant empire. Around 5,000 book lovers participated in the poll.

The magazine had asked its readers to vote for the greatest leader from the names that had been nominated by several renowned historians Matthew Lockwood, Rana Mitter, and Gus Casey-Hayford. As per Editor Matt Elton, BBC World History Magazine, they chose a leader whose leadership continues to have a positive impact on humanity. It was Maharaja Ranjit Singh who topped the poll.

Other Leaders In Top 20

African independence fighter Amilcar Cabral is remembered for uniting over a million Guineans to free themselves from Portuguese occupation. Cabral is credited for inspiring many other colonized African countries to raise their voices and fight for independence. While Maharaja Ranjit Singh got thirty-eight percent of the votes, Cabral received twenty-five percent votes by the readers.

The British Prime Minister Winston Churchill came in third in the list with seven percent votes for his contributions to Britain during the World War.

Winston Churchill was followed by Abraham Lincoln, the President of the United States.

Other leaders in the top twenty were namely Mughal Emperor Akbar, Russian Empress Catherine the Great, and French military leader John of Arc.

Maharaja Ranjit Singh was the founder and the ruler of the Sikh empire in northwest India during the nineteenth century. He has been credited as the “Lion of Punjab”. Singh had established his reign after a period of political, economical and religious uncertainty.

Moreover, it was Singh who ‘reformed and modernised’ the Khalsa army and embraced western innovations, without abandoning local forms.