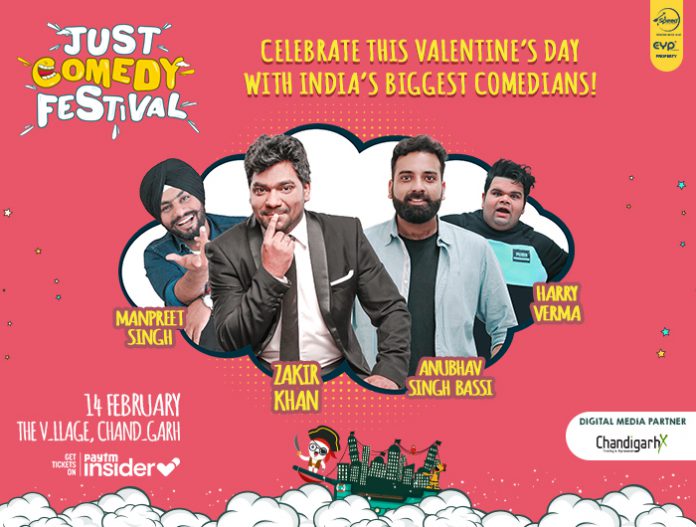 The stage is set for the crowned kings of comedy to deliver whip-smart laughs and charm in classic Just Comedy style! Watch the scene’s most irreverent comics shatter stereotypes, expand minds and raise the roof. It’s going to be an epic day of world-class comedy that has its finger firmly on the pulse.

Hosted by EYP Creations the festival features Anubhav Singh Bassi, The Comic Singh, The Harry Verma and more. The headline act for 2020 includes Zakir Khan. The festival will showcase home-brewed artists- for a variety in the show. They are sure to appeal to a wide range of audiences.

The makers of North India’s first and much-loved humour fiesta has announced an all-new edition of Just Comedy Festival on February 14 at The Village, Chandigarh.

Zakir Khan is the quintessential launda: read your friendly neighbourhood guy, 4 am friend, college senior and experienced colleague. He has been through everything that you have- relationships, love and the survival of the small fish in a big pond. So, this Valentine’s Day, the one of its kind sakht launda, Zakir Khan is here to give you Pyaar Ka Gyan. Get ready for giggles and laughter at Just Comedy Festival!

To all the singles out there “Jinki Zindagi ‘Bandi’ Ko ‘Pabandi’ Sun Leti Hai”! Don’t lose your heart! Just Comedy Festival is going to save your Valentine’s Day with Anubhav Singh Bassi. Lawyer turned UPSC aspirant turned entrepreneur turned stand-up comedian, the internet comedy sensation is here for another show.

Manpreet aka The Comic Singh is on a quest to deliver puns and punchlines glazed with his slick Punjab-bred persona. From delivering pizzas to bringing epic gag lines, he has risen from humble beginnings through his comedic wit. Nudged by his wife, Manpreet Singh quit his job, to give a shot at comedy. It’s been two years now and he has not looked back since.

An Indian actor, singer, and dancer, Harry is an active member of Bollywood Evolution- an International Theatre. He has done various films since 2012 and is running a successful YouTube channel by the name of The Harry Verma.

EYP Creations has had the opportunity to work with some of the most talented comedians. Just Comedy Festival is their celebration of the versatility of the genre and the messages it can hold.

To participate, all you need is to stay tuned to our Facebook and Instagram. Come along and then you’ll get to be a part of the audience- it’s that easy. The winners will get three Silver tickets to the festival.

So, save the date peeps!

ChandigarhX is proud to be the ONLINE MEDIA PARTNER with curators who have pulled together the freshest, fiercest, funniest comedians and yarn-spinners.