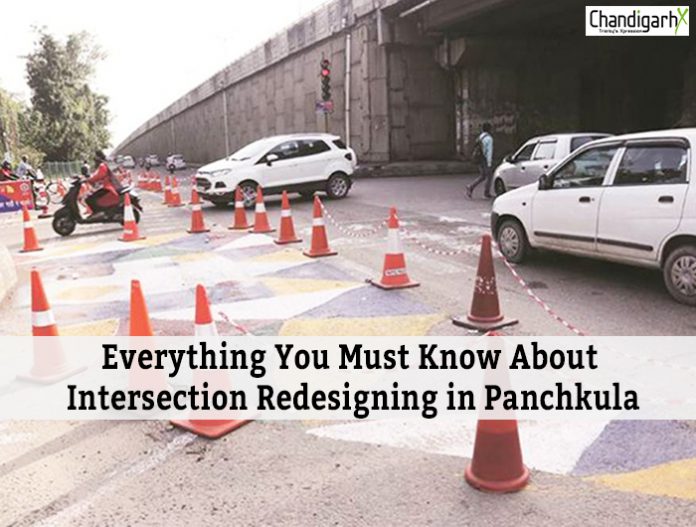 Most of us have seen the pictures or have seen in person how some of the intersections in Panchkula have been revamped and redesigned. We have admired the colours and signs on the road but at the same time it has left us wondering Why it’s been done? What is the meaning of these colours, signs and symbols on the road?

Here’s the answers to all your queries.

Taking cognisance of increasing absolutely avoidable traffic deaths, the Government of India took up a ‘Zero Vision’ policy towards traffic deaths in 2015. Haryana became the first Indian state to formally adopt it in 2017 under the name ‘Haryana Vision Zero project’. Under this, many cities in Haryana have seen such redesigned intersections which are most accident prone or black spot.

In January 2019, the Haryana Vision Zero project came to Panchkula and administration has been working on identifying black spots in the city.

As per Ministry of Road Transportation and Highways, a 500m road stretch where at least five road crashes or ten fatalities have taken place is referred to as a black spot. Data taken into consideration is of the past three years.

The main goals of the intersection redesigning are:

To achieve this, the mitigation strategies are:

(i) painting of these crossroads;

Since the start of the project, mortality rate in road accidents all over Haryana have decreased by 6.7 per cent, which means 230 lives. The project aims at achieving zero traffic deaths by 2030.

The Panchkula municipal corporation believes that road safety which is pervasive across the city and is hampered by congestion, is progressing the number of crashes. To reduce the death rate, it is imperative to recondition these crossroads.