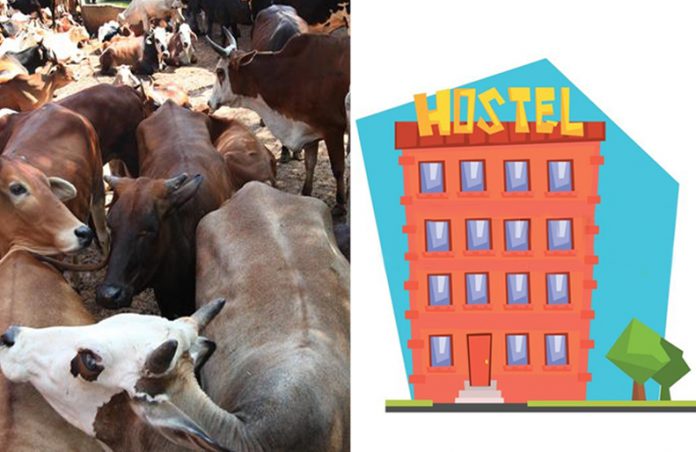 Ever heard it? Now we’ll see it.

Haryana’s Animal Husbandry and Dairying Minister Om Prakash Dhankar has come up with an innovative idea to promote dairy farming in urban areas.

Establish a PG hostel for milch cattle, rear it and produce milk.

As part of his ambitious project, 50-100 acres would be earmarked in major towns to set up ‘PG hostels for cattle’ thus providing a “central place” for milch cattle.

The minister also said, “The government is providing interest-free loan for up to seven years to set up dairy units of up to 50 milch animals.”

Explaining the idea, he told News 18, “If someone is living on a 10th floor apartment, one should not be deprived of cow milk and the joy of rearing a cow. With this facility, anyone living in a city can also rear their own cows. Moreover these hostels would also help those who wish to do ‘gau seva’ for their religious rights.”

As reported in News 18, the opposition is mocking the idea.  INLD leader Abhay Chautala called it a publicity stunt.

He also revealed the details of the upcoming three-day Haryana Swarna Jayanti Cattle Fair at Jhajjar aimed to to boost cattle population in Haryana. The fair will start on October 27.

Nearly 15,000 farmers would be invited every day in the mela so as to motivate them towards cattle rearing and prizes worth Rs 9 crore would be given to the owners of best cattle.