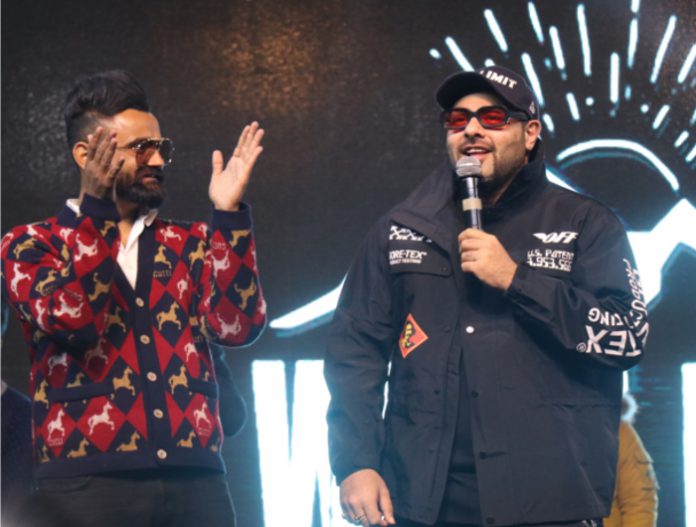 As we stand in the middle of the week today, some of us are waiting for a boring meeting to come to an end, or to finish that presentation for submission before the week ends, or just wondering about the festive long weekend we’re going to enjoy. Getting back to the same routine after celebrating the New Year is even more difficult. We understand! And so, to continue the exhilerating mood and bring back the energy we’ve all exhausted in partying, The Courtyard at Elante, yesterday organised electrifying performances of Punjabi singer, rapper and composer Badshah, singer, songwriter Amrit Maan and model-turned-actress Isha Rikhi.

Chandigarh’s most favourite, one stop destination for shopping, movies and everything a foodie loves, Elante Mall played host to the star cast of the upcoming punjabi movie ‘Do Dooni Panj’. A truly joyous and exciting evening for all the youngsters and music lovers, the crowd turned crazy as the trio set the audience foot tapping with the Do Dooni Panj rap song ‘Jacketan Lightan Waliyan’. The track has already garnered more than 14 million views on YouTube. ‘Peg’ is a full-on bhangra track with quirky lyrics and groovy music. ‘Haunsla’, an inspirational number, provides food for thought. It sends out a message that one must not give up no matter what. The movie is scheduled to release on 11th January, 2019 worldwide.

The much awaited ‘Do Dooni Panj’ highlights the inherent flaws of the education system. A hard-hitting satire in today’s time, it deals with the burning issue of unemployment among the well-educated youth of the society, and the absence of the right person in the right place. All, in a humorous and witty manner, just the way our audience loves to watch Punjabi cinema and it’s hysterically funny actors. The music composer Badshah is now a producer with this film. On exploring this side of the industry, he expresses his inclination towards storytelling issues which have not yet been discovered by other film makers. He says, “The lyrics I like, I pen them down into a song; the stories I like, I thought of making my own movies out of them.” Directed by Harry Bhatti, this ‘movie with a message’ stars Amrit Maan and Isha Rakhi in the lead roles. It also features Rana Ranbir, Karamjit Anmol, Sardar Sohi, Harby Sangha, Nirmal Rishi, Rupinder Rupi, Malkeet Rauni and Nisha Bano.