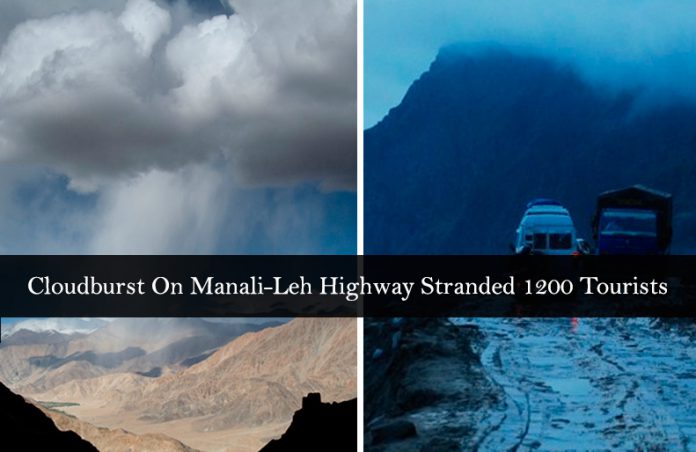 Beauty can be lethal, and we witness the example in the most beautiful Leh where cloudburst had wrecked havoc, stranding over 1200 tourists in the region.
The cloud bursted at 9pm on Tuesday night on Manali-Leh highway between Patseo and Zingzing Bar leaving the highway, flocked by tourists from all over, completely blocked for over 17 hours. The roads on both sides were completely damaged. The road was cleared at 2.30pm on Wednesday, however, danger still persists for travellers as another downpour can trigger a massive landslide on the road.
In addition to this, the rivers and their tributaries are in full spate given the heavy downpour in the hills and rivers are carrying large amount of silt. Chhaki nullah near Manali is also flooded. Water in Beas, Parbati and Chenab rivers is flowing above the normal level.

Many tourists spent the nights in their cars but it was a nightmare for over a hundred bikers. Tourists took shelter in the make-shift dhabas and saved themselves from chilling cold amid heavy downpour.

Sources said that a 200m stretch was under threat of landslide and flood. The entire region is experiencing heavy rain since Tuesday.
Border Roads Organization (BRO) commandant Lieutenant Colonel Vijay Kumar said,” We could not clear the debris at night as flow of water was very high. We have deployed our machines at KM-166. Possibly, an avalanche struck the upper part of the area and caused rolling of the boulders.”
Source: Times of India
Representative Image of Cloudburst in Leh from Google Images
Share on Facebook Share
0
Share on TwitterTweet
0
Send email Mail
0
Total Shares